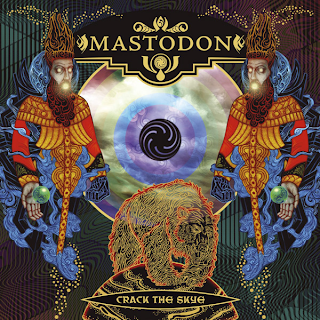 With the follow up of Blood Mountain, their fourth album, it seems that Mastodon have a lot of tricks up their sleeve. Their new album released last year, Crack The Skye, is a magical metallic rollercoaster ride. Although it has seven tracks including a 10 and 12-minute epics that is almost as Prog as far as the eye can see, they show no sign of stopping. It sounds like a metallic representative versions of King Crimson meets The Mars Volta meets Frank Zappa’s Hot Rats-era. Thrash at one point, fierce and twisted, but it comes up with all of the ingredients it needs to come up with one amazing album from start to finish.

Now I have to admit something, this is my first time getting into Mastodon, and let me say I’m getting started to enjoy this band very much and they are carrying the Prog Metal torch into the night. I’ve listened to Crack The Skye twice now and this is an album that you need to buy. I was a little skeptical at first because I thought they were ripping off Dream Theater. I was dead wrong. Here, is an album that will blow your socks off and take Prog and Math Rock to another level like you’ve never heard before.

The album itself is a dynamic concept that allowed the band to use free rein, but go off like a bat out of hell in strange time changes like fireworks going off like crazy. The music is a combination of middle-eastern rock, heavy metal, psychedelic-prog, and driven steady beats that takes the listener by surprise of a band that is completely out of this world. Now mainstream is considered a dirty word, but for Progressive Rock, is no longer a dirty word anymore if you are getting a lengthy introduction to the music right now.

Opening track Oblivion is a frightening track that would fit tightly on Black Sabbath’s earlier albums like Master of Reality. It adds the doom metal disturbance to the mix and the chaotic insanity for Mastodon to move forward into the Prog Doom sound and moving away from the Sludge sound since forming in 1999. As I mentioned before there is a nod to the middle-eastern rock sound on Crack The Skye, with the Egyptian opening Robert Fripp-esque guitar introduction on Divinations as they get the gears guitar roaring, screaming vocals, and fast-sped time signatures that are similar to the Red-era of King Crimson and the Master of Puppets-era of Metallica that was left off during the sessions.

For all lovers of the Progressive Metal sound that is a running finish line throughout Crack The Skye, there are more twisted and insane tracks that will keep you going for more until the very end. The intensity kicks in on Quintessence as it is a blend of Math Metal and Psych-Prog that is almost could have been used in a rock operatic suite with the drums pounding like crazy and guitars just roaring like crazy to add the tension up a notch. Then we go right into the 10-minute epic centerpiece, The Czar.

Starting off with an eerie organ introduction that is in the style of The Beatles Blue Jay Way and then the guitars come in giving a haunting call while the bass follows the groove along with heavy duty vocalizations. Mind you, this is something that is out of this world to give you goose bumps all over your body. And the lyrics of paying the price and fighting to survive with: “Don't stay run away /He has ordered assassination /Don't stay run away /The henchmen are gathered and waiting /Don't stay run away Your role as usurper is found out /Don't stay run away /Tsarina has warned of the danger.” This number definitely could have been in the trailer for Dead Space 2 while Ghost of Karelia features some beautiful militant roars from guitar and bass are racing to the finish line and the singing itself gets you by the feet.

And then we come to the last two final tracks of the album. The title track has a hypnotic guitar driven sound along with a shattering vocalization and this reminded me a lot of Opeth’s Mikael Akerfeldt’s growling death metal voice and calmful as well as if it’s in the mind of Dr Jekyll and Mr Hyde. And very ‘70s eclectic prog at times that would barely climb the mountain tops of time singatures. The 13-minute finale, The Last Baron doesn’t just simply end the album it is a perfect ending to close the curtain on Crack The Skye. It’s a calm-like relaxed number and breathtaking at the same time to be considered a live favorite for the Mastodon fans for the band to do.

Nothing can beat around the bush from this tour de force magnetic album as a Rock Opera. The songwriting and concept is a creative energy force with a lot of brainstorming, Crack The Skye is an overwhelming progressive metal album that is out of the ball park.
Posted by znathanson at 12:37 AM