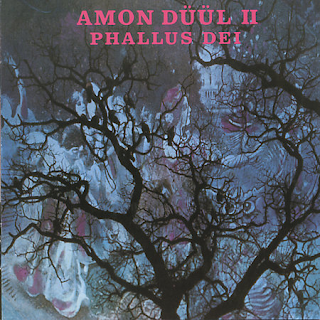 While the British Psychedelic Scene at the end of the late ‘60s was about to emerge, there was a band that took the German scene into a thunderous firestorm and gave birth to the beginnings of Krautrock. With an attitude of the Avant-Garde scene with it, Amon Duul II put together a disturbing path, combining experimental music, early Zappa, and kosmische music all wrap into one. The band was formed in 1968 in the West German scene in Munich where the infamous terrorist group the Baader Meinhof Complex founded (in which the band 100% disagreed with everything with the group were doing to the people). The music was layered yet futuristic at the same time. That and their debut album, Phallus Dei (God’s Penis), is considered a cornerstone in the beginnings of the Krautrock scene of the 1970s.

This album constructs a disturbing yet middle-eastern freak-out sessions that could have been recorded for the therapists when they were taking Primal Scream pills for the insanity. They play very much like a classical piece for John Cale and Edgard Varese and made it more of a twisted piece that could scare the living shit out of the hippies and the flower power generation of the ‘60s. Chris Karrer, John Weinzieri, Renate Knaup-Kroetenschwanz, Lothar Meid, Falk U Rogner, and the late Peter Leopold brought a fierce and disturbing debut that blew the music world away with this magnificent schizoid magnetic structure that deserves a lot of attention and almost gave birth to the Industrial Rock scene.

They brought the weird and aggressive overtones to the table with the opening 20-minute title track. It starts off with an ambient dooming intro followed by yelps with eerie vocalization as it segues into a twisted psychedelic dungeon jam session as guitar and bass create a lot of high voltage along with the drums to make it sound like an erotic orgasm beauty. And then it reaches into a shrieking crescendo as Karrer takes over by going for a gothic approach on the violin as the music becomes an African tribe beat as the members go into the primal scream mode with the shrieks, yelps, and haywire noises from the instruments as if it was something out of One Flew Over the Cuckoo’s Nest that makes it fun and enjoyable to listen to before ending with a dramatic finale with Karrer’s violin and chant-like vocals.

Kanaan comes in the picture with more of the middle-eastern rock sound as if they recorded it for the pharaohs and the goddess of Egypt as Renate Knaup brings the ghost-like vocalization to the piece while the vocals sound like a spoken-word ritual. Dem Guten, Schönen, Wharen introduces some wildly mad scientist experiment groundwork with eerie vocals, sinister keyboard work from Rogner, and almost a reminiscent of the Wolf City-era while Luzifers Ghilom is an underrated composition that shows the band’s structural time changes and weird cosmic rock sound with an experimental punk attitude that would have made Public Image Ltd approve this number.

Henriette Krötenschwanz is the closing finale with a militant tribe drum section done by Leopold as Renate takes over the vocalization in an operatic voice that would have tenors scare shitless by her magnificent yet eerie vocals that she does in the number. It’s a fitting end to the album that is in the foreplay. The two bonus tracks are very interesting. You have the Indian-raga homage to Ravi Shankar with the 10-minute new age sound of TouchMaPhal and the industrial rock homage to Rammstein and Arthur Brown and Kingdom Come’s Journey-era that sounds very much of the 21st century in the style of the Berlin trilogy of I Want The Sun to Shine. Twisted? Yes Strange? Yes? Fun to listen to? All of the above, this is one of the most underrated beginnings of the Krautrock scene for anyone who wants to get into the music of Amon Duul II.
Posted by znathanson at 6:42 PM