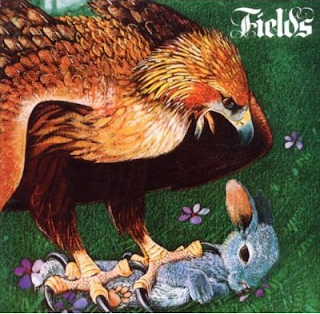 Holy Shit! It’s hard to understand why Graham Field, keyboardist of Rare Bird decided to leave the band after having the success with the hit single, Sympathy and the delightful debut album in 1969. There are no hard feelings towards the band members as Graham formed a trio featuring drummer Andy McCulloch of King Crimson and bassist/guitarist/lead vocalist Alan Barry on their only debut album released in 1971 on the CBS label simply called Fields. The band that could have given Atomic Rooster, Aphrodite’s Child, ELP, and a bit of Le Orme, a warm handshake with this unbelievable album that deserves a lot of attention.

And while the prog trios have achieved success or decided to call it a day including Fields themselves over the frying pan and into the firing line, we may have a rough time deciding why bands are either underrated or overrated. Now we are in the 21st century where Progressive Rock is now longer a dirty word anymore and the geeks are coming back from the dead, do we care that the band features some amazing arrangements including a session singer whose vocals are different from any singer in the genre? Well let’s take a look at the answer to that question.

When you pick up a copy of the Esoteric reissue that is absolutely spot on and features amazing liner notes by Sid Smith including an interview with Field himself about the making of the album, the answer is no. I think Alan Barry has a tremendous voice and his guitar and bass playing are very much in the realm of pre-Starcastle and of course Andy McCulloch’s drumming which I applaud – after admiring his work on King Crimson’s disturbing masterpiece, Lizard. And this is a perfect trio or should I say a supergroup in the realms of Rare Bird and KC in the mind of Fields. Excellent, characteristic, and charismatic ingredients of heavy progressive music.

Given that fact that they were well received in European Festivals and the label dropping them after a new A&R manager deciding not to continue with the band, they decided to give it all they got for the last time as they threw the magic carpet to fly off into the soaring sky. Opening track A Friend of Mine acts like a volcanic eruption thanks to Fields dazzling keyboard work in the reminiscent of J.S. Bach, a great introduction of the classical rock orientation that gives us what is about to come next and gives us a real roar.

While the Sun Still Shines has a very memorable FM Radio sound as the crystal touch balladry of Not So Good has a bit of the angelic harmonies. You have the piano, organ, bass, and drums’ combining together as Graham takes over leading the band into services inside the church as if the band is giving a lecture inside the cathedral to a married couple. It all becomes very much of a mourning sound on Three Minstrels, a reminiscent of the 17th century Renaissance Music ala Gentle Giant style.

Slow Susan is an instrumental homage to Bo Hansson’s Lord of the Rings-era as Field does a pastoral feel on the keyboards as it leads up to the rumble raunchy prog-funk sound of Over and Over Again. In the track, Andy is playing wildly on the drums as if he’s doing a Bruford style while Barry creates some magic on the bass as Graham goes quiet and loud on the organ to give the band the signal to come in. Now in the midsection, this is the part I love. They go into almost a bit of the fusion-esque sound that is very powerful and has a lot of Barry’s singing and Field’s cool Rhodes-like sound on the keyboard as if he’s Chick Corea. At the very end, is Field going crazy on the organ as the band members are blown away of how far can Graham go on.

Feeling Free and A Place To Lay My Head are in the realm of Church music. You can imagine the gospel choir in the background singing with them with a lot of heart and soul and sweating buckets to the band and a lady doing some harmonizing vocalization with the band. Fair-Haired Lady is an acoustic crisp sound that has medieval folk-like sound as Barry fingerpicks the guitar in this romantic beauty of this gorgeous yet beautiful woman that sees before his eyes. The Eagle closes the album with more of the pastoral, but symphonic rock sound as Barry does a Spanish guitar sound while playing a wonderful mellotronic sound for a brief while and then BAM! He, Graham, and Andy go at it together to see who can win the boxing match at the very end of the piece while Field plays a quiet somber uplifting finale on the grand piano.

It’s a shame they never made another album after the label dropped them, but this is the real deal of the underrated bands that is still growing strong and it’s like a flaming fire that won’t burn out as the gasoline keeps on pouring for more of the fire to come at it like a speed demon. Even though they split up, it is a highly recommended album that you really need to sink your teeth into.
Posted by znathanson at 10:04 PM