Barclay James Harvest - A Concert for the People (Berlin) 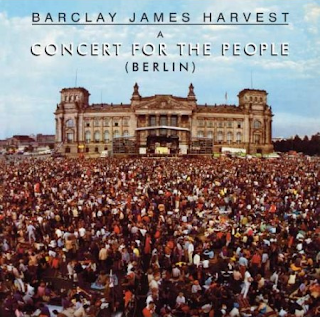 It’s been nearly 30 years since Barclay James Harvest performed live in front of 250,000 people in West Germany in Reichtag which was next to the Berlin Wall which divided between the east and the west before tearing it down for freedom in 1989. It was also filmed as well which chronicled the band’s set list in their home town in England. At the time according to the liner notes, the Berlin Senate Cultural Committee decided on where would be the best place to put a free festival, so what BJH did was to return to Germany in August of 1980 to do a concert there only to find themselves between the two since the beginnings of the Cold War in 1947 and put them in lock down by the East.

A Concert for the People (Berlin) offers a definitive momentum in BJH’s career. It wasn’t just that the band was there to promote a concert for the fans, but a concert to bring peace and putting an end to the division of Germany between the East and West along with the Cold War. The booklet features pictures of the gig, promos, and screen shots of the filmed performance live including a 45 RPM of Child of the Universe and the B-side, Back to the Wall, which was off on Turn of the Tide in 1981. For this amazing performance, some of the classics were brought back including the favorites, Mockingbird, Hymn, and Child of the Universe to name a few.

As the band now a trio with Woolly Wolstenholme going solo with his band, Maestoso, they brought Kevin McAlea and Colin Browne, went onstage and brought a magnificent reception. When you hear this, not only the audience are getting a real kick out of this, but it brought power and magic in the atmosphere with the music and the touch they bring to the stage. You have the eerie emotional ballad, In Memory of the Martyrs, a haunting tribute to the brave heroes who fought and died for survival by jumping to get over the Berlin Wall and moving into the West while escaping from communism in the East. The roaring 6-minute introduction of ‘80s film-noir sound of Love on the Line, brings the new wave sound to a standstill while the lukewarm mysterious version of Mockingbird sends tears down in your eyes.

Rock ‘n’ Roll Lady sounds very much in the reminiscent of AOR (Album Orientated Rock) as if they were resembling the new prog sound with: Starcastle and Kansas combining together while guitarist John Lees creates a moody atmosphere on his solo that makes it very Floyd-like as Nova Lepidoptera starts off as a space symphonic orchestra with the moog and explosive string quartet on the keyboards and then it turns into a mourning and heartfelt futuristic journey into space as Lees and Holroyd create magic singing together in the bridge as if they were communicating with guitar and bass setting the tearful structure that is joyous and calm-like.

Sip of Wine sounds very much a tribute to Peter Gabriel’s Solsbury Hill but almost as if it was a sequel to Gabriel’s hit, it has strong vocals and better rhythm as well as the late Mel Pritchard creates a jazz beat on the drums to set the uplifting number to give John and Les creative structure. Same thing with Life is for Living as it becomes a message to bring peace to put an end to communism rather than being a dance and Hawaiian number, but it is an angelic piece that is well-done performed live as you can tell the audience are getting a real kick out it clapping and singing along to the band. Then we get to the goose bumping yet breath-taking stunning live take of the fan-favorite, Child of the Universe.

This is where the audience, in my mind, are fighting back tears and singing along to the number saying, “Always there to join in someone else's fight/I didn't ask to be born and I don't ask to die I'm an endless dream, a gene machine/That cannot reason why.” For me, this is about fighting for survival and dreaming to bring peace in Germany and never to die to surrender, but to join hands and live to fight for freedom. The soaring tribute of Berlin, is one of the most unbelievable songs that would send chills down your spine to give it a real punch in the gut.

Loving is Easy is in the similarities of Progressive Pop. It’s a very interesting number yet in the style of the Lennon/McCartney reminiscent, but very quirky and heavy at the same time and the closing finale, Hymn, has more of an edgier sound performed live with its prog folk acoustic sound in the mind of John Lennon that is the answer to Give Peace a Chance. A moving live album representing peace and joy of the beginning of the new sound for BJH lays straight ahead for the band and would have mixed opinions for the fans by drawing lines in the sand, but this is the last real album for Barclay James Harvest that is worth the price.
Posted by znathanson at 2:18 PM