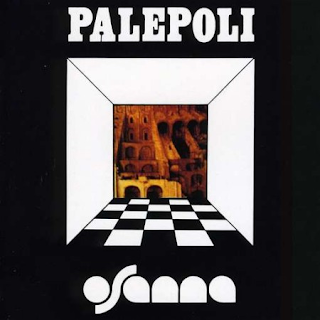 If you are looking to sink your teeth into weird combinations of King Crimson meets Jethro Tull meets the Pawn Hearts-era of Van Der Graaf Generator for all of the Italian structures of twisted time-changes, weird music, and bizarre beauty, look no further. Italian Prog maestros Osanna have been giving us a taste of theatrical rock that has taken the listener to boundaries that we’ve never seen before and shown us a new way to give the Peter Gabriel-era of Genesis a run for their money with Art Rock like no other.

Formed in Naples in the late ‘60s, the band considers guitarist Danilo Rustici, lead vocalist and keyboardist Lino Vairetti, saxophonist Elio D’Anna, drummer Massimo Guarino, and bassist Lello Brandi. The band already had two albums including a soundtrack to Milano Calibro 9 in 1972. While L’uomo might have been the big straw and push for them, it wasn’t until their third album, Palepoli in 1973 that shows their music in a made and twisted way.

Palepoli is not an easy album to listen to, but it’s a combination of Avant-Garde freak out sessions, middle-eastern fusion scenery, and the Mediterranean atmospheric background. With D’Anna going batshit crazy on the sax as if he’s David Jackson, Lino Vairetti is more like an Italian version of Peter Hammill with his story-telling and mythical settings fitting the album like a gem. One of the structures in Progressive Rock’s unearthed gems is to see why this album was ahead of its time and chewing it huge amount of bite, making the Jazz sound into unbelievable settings not to mention on Stanza Citta, they pay homage to the Beatles Revolution 9 from the White Album with the tape going backwards into haywire mode.

With only three tracks, you have to wonder if VDGG were enjoying this and thinking to themselves, “They really did one helluva job with this? I wish we could have put this on Pawn Hearts.” If the two bands had worked together along with Crimso, it would have been a perfect match made in heaven, then they would have made Palepoli one amazing twist, but this really takes the cake with some creativity and interesting roars that would jump you out of nowhere. Most of its futuristic like Pre-Mars Volta on the last 21-minute epic, Animale Senza Respiro while Oro Caldo becomes a soft calm Egyptian raga turned into a Crimson haunting sneering beauty.

From shocking to mind-blowing experimentations like a Mad Scientist ready to cook something out of the lab, Palepoli proves to be that it doesn’t just have to be a Progressive Rock album. Still 39 years later, the album desperately needs a lot of attention and recognition from avid prog fans to wake up and realize this was an album that stood the test of time.
Posted by znathanson at 7:02 PM