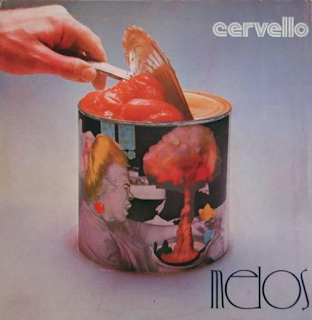 The eerie and twisted sounds of an unknown prog band from Naples in where the same place where Osanna was formed, Cervello had comparisons between Van Der Graaf Generator and the early days of King Crimson, but in 1973 they released one of the most weird and mad scientist albums that would ever come across a bag of groceries for a dosage of Italian Progressive Rock. Like a trampoline filled with Jazz, Avant-Garde experimental music, and Spooky Halloween Music, Melos is one of those albums that will have some listeners scratch their heads and wonder what the hell is going on.

Released on the Italian label Ricordi in 1973, the band’s only debut album is bizarre, sneering, beautiful, and strange. While there aren’t any keyboards on the album, it’s a guitar virtuosity that would have you taken by surprise providing the time signatures to go flying off the wall and it’s almost like a dystopian sci-fi story line in the realms of Alejandro Jodorowsky set to weird and twilight zone music that provides the complex and thunderous achievements through a great unearthed gem.

Filled with mind-boggling Fripp-sque guitar layered sounds and freak out acid jazz sessions, pieces like the spacey atmosphere haunting roar of Scinsione (T.R.M.) and the droning sinister introduction with Canto Del Capro could have scared trick or treaters by running to their houses and not coming out while the rumbling sax comes in full swing on the beautiful thunderstorm of Euterpe. Now mind you, this band could have opened for King Crimson and PFM, and they would have been completely blown away from what they have heard in terms of changes in the music, vicious guitar sounds that almost sounded like a razor blade, and all of the ingredients that is all art and experimental music of the ‘70s and would have given Terry Riley and Pierre Henry a huge field day for them.

Now again with Palepoli, Melos is not an easy album to listen to from start to finish, yet the dangerous sounds of experimentations would have given you a lot of wake-up calls. The music can be very odd and weird for prog geeks to sink their teeth into, but after playing it for about 12 times they would understand why this album was completely ahead of its time. Now it’s almost a collector’s item and given here the touch of wild arrangements and temperatures rising that is shown evidential here on Melos.
Posted by znathanson at 2:33 PM