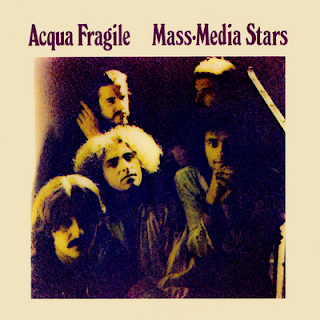 Formed out of the ashes of Gli Immortali and approval from a little help by Italian Prog pioneers Premiata Forneria Marconi, Acqua Fragile was a band that could have made the big time, but was short-lived. However like Flash featuring Peter Banks of Yes, they were also a five piece band that paid homage to what was going on in the UK. One of the most underrated vocalist was Bernardo Lanzetti who would later join PFM on Chocolate Kings, his vocals sound familiar in the realms of Derek Shulman, Roger Chapman, and Peter Gabriel and would have fans sort of blown away to realize what the hell was that?! This is fucking great!

While the band’s sole self-titled debut album had English lyrics which was unheard and interesting for Italian bands to reach the boundaries to sing in a different language, their next and last album Mass Media Stars would explain why they were ahead of their time and giving the Prog pioneers a stamp of approval to give them the green lights, but they certainly remain one of the most see-them-before-they leave-them bands of the Italian Prog genre. Starting with the spacey 7-minute Cosmic Mind Affair, combines with quiet harmonies and Yes-like vocals with a lot of spiritual flows throughout each of the instruments to embark on a mesmerizing adventure that you’ll never dream of.

Acqua Fragile were way ahead of their time and bring a huge resemblance of Gentle Giant’s first four albums that would have your jaws dropping. You can hear the influences on the time changing improvisations of the title track and Opening Act, which has classical boundaries, bass lines flourished, and providing the surrounding Italian structures to fit the pictures inside the exhibition to have the grooves dance-like.

Swooshing down like an Eagle soaring 30 miles per hour on Professor, a fierce energetic power house rocker that shows they can give a lot of the arranging and composition pieces a real kick in the gut from the reminders of Nektar’s concept story line and soar to the quirky fuzz tone organ sounds and bass structures of an homage to sci-fi story structures in the realms of Philip K. Dick and Ray Bradbury to come in mind. The lukewarm prog folk crisp of Coffee Song which closes the album brings the symphonic beauty sounds of Family’s Music in a Doll’s House-era with classical guitar beauty, keyboards mourning and a mellotron like sound makes the piece very orchestral and some touching early Genesis sound.

While people may cringe to Acqua Fragile and have mixed opinions about the albums and the band and have a wonderful sound on Mass Media Stars, you couldn’t just deny them, this is an album that stood the test of time and has finally almost deserves the respect it needs well and accepted.
Posted by znathanson at 10:09 PM