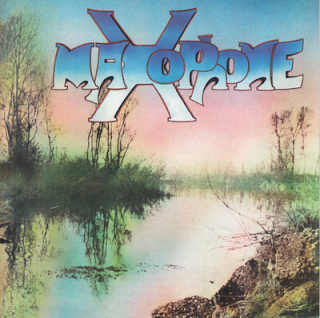 The influences of the English version on Maxophone’s 1975 sole self-titled debut album drew influences from PFM, Greg Lake, Triumvirat, and Gentle Giant, however they were carrying a baggage of the symphonic structures and owed more of a tribute to the British Prog scene like a breath of fresh air. Formed in Milan at the golden-era of the ‘70s, this six piece band could have been become the biggest booming sound of the Progressive Rock movement in Italy, but they didn’t get the attention they deserved and they led their only debut album with their roots as students in music class.

It’s a classical folk atmosphere for them with keyboards, bass guitar, saxes, French horn, and background vocals that provide the influences of the Shulman brothers and what really makes this lost and hidden prog gem, a real special treat. Great time changes of moody scenery’s makes a wave of unbelievable movement’s that sets the tone of the album and you can hear the eerie quiet turned emotional balladry on When We Were Young.

However on the opener, Life Can Be Like Music, it’s like an opening to the Olympics with an attitude where the classical piano and organ are through the stadium giving a warmth fanfare as it goes through melodic vocal arrangement while the ending has a dramatic orchestral rock sounding that will send a chill down your spine. Thunderstorms and lighting flashes through this album like no other to have a nice pasta dish on Six Against One goes through a dooming organ introduction before going into a jazz-like fusion improvisation that could have surprised audiences with creative complexes to set the music a wonderful experience.

Fase is filled with a dramatic guitar introduction before going into the Jazz Fusion sound and then into a Gentle Giant improve with the vibraphone and you can hear the influences of their music on this track while the last track that really could have given PFM a stamp of approval for them with a classical guitar, French horn, folksy vocalization, strong and powerful organ sound before getting into a booming prog explosion and not to mention a sinister guitar solo that is almost the Italian Midas touch for all prog fans to have their mouths watered over this composition.

The writing almost could have been done by Pete Sinfield and could have gotten them into the cult status and international audiences to approve and appreciate the work they have done though the album had never saw the light at the end of the tunnel. It’s a shame they were in a huge competition to see who the best Italian Prog band was and Maxophone never got attention, they were almost the mysterious prog rock band of 1975. Sad they never received attention, but here on this album, you can tell how damn good they really were and the result is here in the pudding.
Posted by znathanson at 10:35 PM