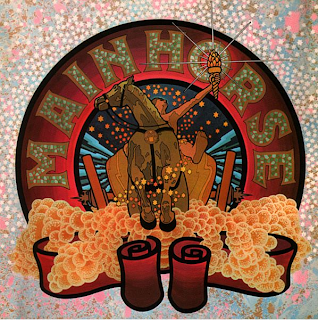 Nearly 40 years later since forming in 1970 at the height of the golden gate of Progressive Rock, Mainhorse has been a collector’s item for record lovers to search for a copy of the self-titled debut album on vinyl. They are undoubtedly one of the most unearthed symphonic jazz prog bands to come out of the sand thanks to the Swiss mad scientist of keyboards, Patrick Moraz. Even though he’s best known for his solo albums including the mind-boggling twist on The Story of I while being in bands like Refugee, Yes in his only album, Relayer and The Moody Blues from 1978 to 1991, he brought the textures of orchestral rock, jazz fusion, and time changes that would give you goosebumps forever.

Now we come to Mainhorse. This was the only debut album originally released on the Polydor label in 1971, the album has a hard edge rock sound featuring blazing fires of symphonic prog on the Hammond organ almost as if Hard Rock and Prog combined together makes it a tightrope ride that is worth checking out. There are only seven tracks on the album, but featuring Moraz’s keyboards including Peter Lockett’s spine-tingling guitar work, Bryson Graham’s heart pounding drum beats while Jean Ristori’s bass work is hard to describe but brilliant.

At times it’s sounds very jazzy and very fast, at others it’s disturbing and beautiful, turning it into a roller-coaster ride which could understand why this band received limited commerciality before calling it a day. This is an underrated album which means this stood the stands of time when you have a lot of leaping out of your seat to expected the unexpected, it keeps you guessing until the very end for the listener to have the volumes up to a maximum level. Peter Lockett's vocals are in the rein of the late Spring vocalist Pat Moran and Second Hand’s Ken Elliott which shows on the opening Introduction, as he gives a dosage of scat vocalizations and soaring high singing, while his guitar takes him to a new direction as Patrick Moraz understands how Peter can give the solo a real raunchy metallic bluesy roar as the two compete in the ring to see who can come up with the best work often like a competition.

Then it comes to Moraz as he does a Fugue and a Keith Emerson punch while Ristori comes up with a fast bass line, Lockett’s guitar work, and Graham’s drums is met with a developed power pound cake. There is no dueling, nor do sword fights, but together, play like a magnetic link with honor and delivering the goods. Each of the instruments is spot on and take turns to share on who’s turn is next and give each band member the time to relax a bit and knows when it’s time to come in and play inside your heart, they are self-disciplined when you listen to this and takes the structure well creative.

The homage to Tony Iommi and Brian May’s guitar work is evidential with Lockett’s lyrical and layered sound, but it can be calmed down as the concept of time passes by done by an orchestra and Moraz’s moody organ work on the emotional touch of Passing Years, but if you want to go into the early beginnings of Symphonic Metal, take a listen to Such a Beautiful Day. It seems to be almost a rocking power house and the vocal lines go into unbelievable time signatures as the organ goes into the Deep Purple mode in the rein of Jon Lord with the era of the Mark II sound as if it’s In Rock all over again. The 10-minute epic, Pale Sky, has all the ingredients it needs: dramatic film scores, intense beauty, futuristic sounds of the 21st century as Moraz plays through a Klavio Synthesizer to give it a disturbing atmosphere while the classical guitar is very Reinhardt-like beauty with a twist, and calming down for a sinister finale.

Then, everything becomes an up-tempo beat on the next track, Basia. It has a dance beat thanks to the shuffling acoustic guitar and the “dabba-dabba-da” vocalization that Ristori, Moraz, and Lockett do to create a fun-like sing-along song to get you in the catchy momentum. After this, Moraz comes in the midsection to create a jazz-classical electric piano soul as if Bach had teamed up with Traffic’s John Barleycorn Must Die-era to get you in the swinging momentum and then it’s the cavernous cave mystic sound that Moraz does on the Organ to give it that sense of quiet and haunting melodic structures.

More Tea Vicar sees Moraz playing a different instrument on Glockenspiel as it goes back into the haunting atmosphere in an instrumental way. At first it sounds like a Bossa-Nova beat in the Brazilian city as the band go into the time signature of 4/4 as they play almost as if they are in New York’s Bitter End with John Coltrane and Miles Davis before going into heavy rock territory. Which is very cool, going into the Bossa-Nova Jazz sounds of Brazil with Glockenspiel and jazzy percussion in the realms of Elvin Jones and turning it into a Symphonic force of energetic power. The sprawling 10-minute finale, God is avant-garde, classical, experimental, and fiery raw power to get you in the mood for the band’s climatic composition.

It is one of the most challenging and dynamic pieces that you might find yourself into the pond of prog epics like no other. You have Moraz playing the Klavio by doing a middle-eastern background as the band go into the rumbling film score sound. It’s bone chilling yet terrifying as if Fruupp and Mandalaband had teamed up with Atomic Rooster to create an explosive piece that will knock Yes fans out of the ball park. And at the very end, when you hear the fade out, you think “it’s over”. It isn’t. It has Moraz creating a sound that goes, “SCREECH!” as the keyboards go into haywire mode that would make the listener think “Holy Shit! That’s an ending right there!”

Even though the band split up, Mainhorse are one of the most unsung bands in the progressive rock hidden treasure files. Twisted, Mind-Boggling, and Disturbing are perfect examples of the unsung band.
Posted by znathanson at 9:06 PM