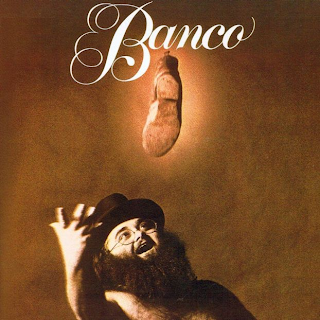 Already having success in their hometown in Italy as the Manticore label was searching for up-and-coming artists in their wing, Keith Emerson had praised the Italian scene in the ‘70s during an interview with Melody Maker and praised Banco Del Mutuo Soccorso’s musical style and he knew that it would be a perfect deal for Keith to sign them to their new prog label. Leaving the Ricordi label was a difficult decision after having the first three Italian albums up their sleeves, but it was time to move on. Like their predecessors Le Orme and PFM who were climbing the Italian Prog tree, the band had a massive cult following in England after performing at the Roundhouse and the Marquee while receiving a lukewarm telegram from Greg Lake saying, “Congratulations on first successful English tour. Hope all goes well. Sorry won’t be able to be with you best of luck.”

Originally released in 1975 on the Manticore label and in 2010 from the reissued Esoteric label who worked on the Manticore catalogue, simply called Banco and feature the first new three tracks in Italian while the last four tracks are a translation of their songs in English from their Ricordi years. The band recorded the album in their home town in Rome and their love of the British Prog sound in England. Like looking through a crystal ball, the music is very classical, baroque and very much in the realm of Gentle Giant thanks to the keyboard sounds of the Nocenzi brothers who give the soaring vocalist Francesco Di Giacomo a huge boost and let him give a chance to shine. Not to mention the sound of an operatic rock vocalization of Pavarotti that Fransesco has.

The album starts off with the new age ambient almost ‘80s sound of Chorale (from Traccia’s Theme) as Vittorio and Gianni create a medieval Kraftwerk sound in the realm of Autobahn as it segues into a Renaissance jumping tempo sound on L’Albero Del Pans (The Bread Tree). It has a lot of dynamic, dance beats with the synth and piano and thunderous bass work that Renato D’Angelo brings to the table while guitarist Rodolfo Maltese strums like Pete Townshend on the acoustic side. The 14-minute Metamorphosis is one of the band finest moments.

Starting off with a thunderous guitar work that Rodolfo Maltese does with a heavy riff section that creates the tension as the Nocenzi brothers help him out to ease out and have some fun before becomes a thunderous roar and sinister background as they give Gianni a chance to shine. Gianni is absolutely magnificent as he does his Piano Concerto which goes through various time changes and variations almost as if he’s performing in front of ELP to give the band the big thumbs up. And then Calderoni’s thunderous drum patterns come in to give a hell of a solo.

He is a combination of Billy Cobham, Jamie Muir, and Bill Bruford as he starts off quiet for a good while while Gianni creates a suspension atmosphere for Pier to come in to be as loud as possible as Vittorio comes in to do a disturbing moog piece to set up the emotional boundaries as it screams like an insane person going to break free out of the asylum before calming down into screaming and shouting as the bass and piano create an eerie scene for a good while. Rodolfo creates some metallic sounds on the guitar before the instruments go into a clashing mode as it explodes like dynamite.

Later on, Renato and Vittorio pay homage to Franco Battiato and Amon Duul II’s golden-era before it becomes a twisted circus gone into a world of magnetic insanity. The band take a moody yet symphonic finale as Francesco comes in to close the track with his mighty voice to give it a wonderful rock opera sound for the Italians to go batshit crazy over Banco shouting “Encore! Encore! Bravo! Bravo!” But it’s not over yet, folks.

The English versions of the tracks have only just begun. Outside (R.I.P.) sees Renato’s creating his bass lines like a speeding train as Vittorio and Gianni Nocenzi going at it to see who has the best solos on the keyboard and piano before it becomes a futuristic sound of Tangerine Dream’s early days while Maltese on the other hand does his homage to Robert Fripp for a good while before it becomes a heavenly climatic ending. The ballad, Leave Me Alone (Non Mi Rompete) which features Maltese’s classical guitar sound in a renaissance folky way, carries the Baroque sound for the band to lay back and go acoustic as Francesco goes mellow on his vocals while the lyrics have fairy-tale complex. Maltese is powerful on his guitar playing with conducting time movements to let the band come in and see where the direction comes in.

On that tune, it’s just Francesco, Maltese, and Nocenzi’s springful keyboards unplugged as they improvise in the bridge with Giacomo’s vocalization and Maltese’s bullet train’s homage again to Townshend’s strumming. A perfect combination match made in heaven. Nothing’s The Same (Dopo Niente E’Piu Lo Stesso) tells the tale of Soldier’s coming home from a brutal war on a speeding train probably from the second World War. It has a dramatic background and sinister musical scenario’s from the Nocenzi brothers sound of the flourishing keyboards, Maltese dooming guitar work, and Renato’s thunderous force of electricity on the bass creates a moody anti-war scenery.

Then it becomes a free-for-all changing of the pace as the band just transform into their heroes Gentle Giant and ELP as they give drummer Pier Luigi Calderoni a moment to shine with his drum patterns and helping the band out with his time signatures. This guy knows his Improvisational Theory very damn well. As he and Francesco go into the hall and work together as brothers and see where the piece would take them before Vittorio ends the piece with his spooky electronic string section and Gianni’s synth helps calm the storm down.

Traccia II which was originally released on Io Sono Nato Libero, features Gianni’s grand piano work as Vittorio helps his brother out with his Kerry Minnear-sque sound on the keyboards to make it sound very medieval. Again it’s medieval instrumental rock that gives it a heartfelt ending as if the good guys have won the battle and come home from a hard and long work. Stand the test of time? Take a trip with their days on the Ricordi label and then go deep into the waters of the Manticore years and take a wonderful magic carpet ride with Banco’s music and see where the carpet takes you.
Posted by znathanson at 4:39 PM