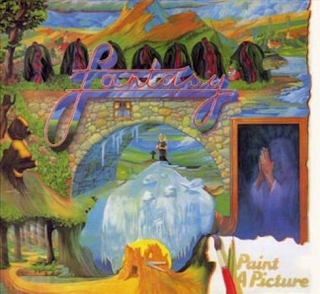 Paint a Picture has been considered a collector’s item thanks to MOJO’s 2005 issue on the Story of Prog Rock as Derek Oliver, founder of Rock Candy Records considered it the top ten collectable prog album every superfan should hear. Fantasy was formed in Kent at a farmhouse in Chapel as the band did their early rehearsals there. They are sort of the answer to Peter Gabriel’s Genesis with melodic and symphonic pieces and could have given Gabriel a run for their money, but with a beautiful album cover and inner gatefold sleeve, it just goes to show why this band deserves a lot of attention since releasing this lost classic on the Polydor label in 1973.

Like an unexpected magic carpet that appeared out of nowhere, the musicianship is well-structured and the songs themselves are well-crafted as if they could have been written for the animated classic, The Last Unicorn. It’s a perfect hidden treasure that is only 44 minutes of beautiful vocals done by Paul Lawrence, powerful story-telling keyboards from David Metcalfe, and harmonic guitar sounds from Peter James. With the Supernatural Fairy Tale of song structures is very much in the realm of Genesis-inspired lyrics together forming in the realm of the symphonic atmosphere of: Cressida, Fruupp, and the Harvest-era of Barclay James Harvest.

Opening with the title track on a melodic folk rock structure done by James guitar playing as creates a psych wah-wah guitar mood done by the moody organ and vocalizations done by Metcalfe and Lawrence, it then goes into a soaring prog-psych feel with a little help from an orchestral background to set the tone of the song. Circus is almost a sequel to the Genesis single Twilight Alehouse, as bassist David Read comes into the album to help drummer Jon Webster keep the beat going. The guitar section is almost very much in the realm of Steve Hackett’s virtuosity as James and Metcalfe play with a layered sound while the last 2-minutes becomes an early representation of Arena Rock for a second and then goes back into the power house of drums, organ, guitar, vocals, and bass just as if they are letting the dogs out of house to run loose freely.

The Award is back into the steps of British Mellower Folk Rock sound with an up tempo beat with some fine acoustic guitar work and electric steps to get you in the mood for a laid-back atmospheric warm sunny day while Politely Insane is in the realm of medieval epic funk prog sound as it deals with the views of insanity and being in love with it. It could have been a hit single with some of the prog-pop sound, but it’s raw and powerful as you some amazing lyrical lines like: “I decided to hide away/And tried to forget what they had done/But time couldn’t change the memoires of the past/If I was a man I wouldn’t be crying.” Now that’s poetry right there.

Then it’s back into the folk realm with a finger picking sound in a haunting gothic ballad of Widow and the moody symphonic structures of Icy River really gets the listener knowing that, “this is much better than the three prog giants.” The homage to Van Der Graaf Generator’s opening of Darkness (11/11) really is worth checking with the bass and drums going bum-bum-bum-bum-bum as Thank Christ provides much of the ballad sound as David Metcalfe creates a spooky sound on the keyboard as they move into a tribute to the savior. Young Man’s Fortune is back into the up tempo mode as Read comes in with some amazing bass lines while the guitar and organ are the top priority, but the organ creates a disturbing thunder to get Read knows he’s with him all the way.

Gnome Song is almost a tribute to Trees disturbing folk classic, The Garden of Jane Delawney. It almost could have been recorded in a gothic cathedral with a grand piano and acoustic guitar setting the tone of the composition. It has a John Lennon-sque sound as the closing track, Silent Mime is a mourning organ rumbling epic finale that features a booming percussion sound that has a timpani and snare drum and almost very much into the tribute of Crimson’s Bolero on the 23-minute epic, Lizard, but the piece is eerie and beautiful. An early testament to vintage and hidden prog gems that let the bands not take themselves seriously, but take the project very carefully step-by-step. Fantasy’s Paint a Picture is a must have for your prog collection.
Posted by znathanson at 1:10 PM