Odin of London - The London Tapes 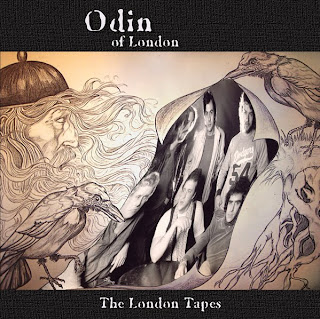 Having admired BunChakeze’s Whose Dream and one of the best lost albums of 2010 (this was in the early 1980s) and released on internet stores like: iTunes, CD Baby, and Amazon MP3 last year, this is more of the unsung tracks by Odin of London in which is called, The London Tapes. You could buy the MP3 album on CD Baby and now self-released, these sessions offer more of the lost tracks that the band had done before dissolving.

Listening to these tracks is almost like being in the studio and experiencing the band working to create some magic here. It’s hard to deny and never anything bad when Odin created something magic. They could have been the next Marillion and take the New Wave of British Prog a step further and would have given Derek “Fish” Dick a run for his money. And we got to give credit for the band and Colin Tench to re-release the tapes. You could imagine a modern version of Pink Floyd teaming up with Marillion and adding some layered ‘80s sound simulating melodic harmonies, atmospheric surround sound, and story-telling lyrics, makes the compositions a ticket to ride.

There are traces of The Who’s rock opera Tommy in the soaring beauty of Eagles and the elements of riff-ballad on Change sounds a lot like the duo guitar sounds of Dave Murray and Adrian Smith of Iron Maiden, but with Colin Tench he made it sound like as if the guitar had a double-tracking sound as if Fruupp had teamed up the two guitarist to create a medieval retro rock sound. The dooming futuristic straightforward rocker, Dead of Night acknowledges a film soundtrack reference that could have been used in Disney’s 1982 cult classic, Tron for the light cycle race sequence while it owes a large debt to the AOR (Album-Orientated Rock) sound resembling Styx’s golden days and Starcastle’s sound of Citadel.

Now on the opening track, Alcatraz, at first it sounds like the riff-rocker of Boston’s More Than A Feeling, but it provides a mellower but beautiful guitar passages that Tench does to give the band to cool down as if he is Andy Latimer and gives a warm welcome to the London Tapes. Musically, there is again the tributes with Raven, an homage to gothic poet writer Edgar Allen Poe, it becomes a going on the road power house piece with the guitar roaring in the sound of early Thin Lizzy’s Vagabond-era and Camel’s Snow Goose-era. Mythically, Catherine sounds almost like an acoustic British Folk song at first with Colin doing a finger picking sound on the acoustic guitar as the song deals with life after leaving home and not coming back, but it a smooth and eerie disturbing piece in the realm of Odin’s sound before becoming a thunderous finale that sends a chill in your spine.

The last two bonus tracks are worth a gem. You have the alternate version of Tony Butler’s vocals sounding almost as if Dennis DeYoung and Geddy Lee had a kid brother in a big way on a different take of Alcatraz while the new song Gentle Friend featuring John Culley's homage to David Gilmour as he carries a huge torch in the Pink Floyd Momentary Lapse of Reason-era and it maintains a sentimental upbeat tempo that carries the Odin sound. All in all, The London Tapes is almost another unsung gem that carries the resume of Whose Dream in any of the unsung obscure prog bands that never saw the light at the end of the tunnel. This is a must have for all prog lovers to sink their shark-like jaws into.
Posted by znathanson at 7:51 PM