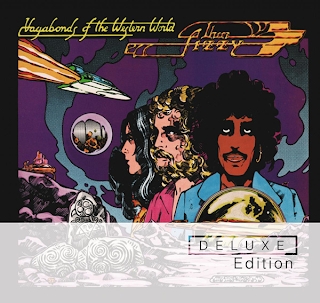 Thin Lizzy may have been the bee’s knees of Heavy Metal music for over 41 years. They had the songs, the tough guy looks as if they were a gang, and the music had a great Irish flavor to the sound. Even though Jailbreak remains a classic Lizzy album in 1976, these two deluxe edition’s (Vagabonds of the Western World and Jailbreak) prove to show how important Thin Lizzy were and launching chart success, receiving worldwide attention in the states, which singer-songwriter and bassist, the late great Phil Lynott still carries a punch with his vocals and bass playing.

Schoolboys Phil Lynott, guitarist Eric Bell, and drummer Brian Downey formed the Dublin band back in 1969 after Bell saw the band, Orphanage and knew that Lynott had talent and could sing very well. The band was named after a comic book of a robot named Tin Lizzie, but Thin Lizzy stuck. The band was signed to Decca Records in 1970 and soon released two albums: The self-titled album and Shades of a Blue Orphanage. Both of these albums never sold well, but soon got notice from DJs John Peel and David “Kid” Jensen who appeared on the third album as a narrator on the Vagabonds album.

Lynott knew that their third album would be the last time that the band would appear on Decca as it was time for a change in the music scene and the timing was right. On Vagabonds of the Western World, Lynott’s strong vocals are coming in like a race car that went 600 miles per hour. The influences of comic books, irish folk lore, and bluesy raunchy funk thanks to Eric Bell’s hammering guitar solo as if he’s in the realm of Jimmy Page and Ritchie Blackmore, Vagabonds remains an underrated Lizzy classic that deserves a lot of attention.

There’s the love-song ballad with a string quartet on A Song While I’m Away as if Lynott has become Englebert Humperdinck, which Phil dedicates this song to a girl who was the love of his life. The on-the-road power house of the single, The Rocker which deals with having sex with girls after a performance in its early resemblance of AC/DC’s High Voltage-era while the prog touch of The Hero and The Madmen which features Jensen in his realm of the style of Laugh-In’s Gary Owens, pays tribute to Phil’s childhood heroes of the Superhero comic books of the 20th century.

Opening political blues shuffle of Mama Nature Said which deals with World Pollution, packs a huge entrée thanks to the Eric’s slide guitar sound as if he’s Duane Allman and the rumbling thunderstorm of Slow Blues are quite evidential of Thin Lizzy’s love of the blues . The Irish Folk Stories that Phil loved in his school-era really comes in the elements of early beginnings of celtic metal of the title track while the emotional roughness at home comes at a full time swing of Little Girl in Bloom which deals with teenage pregnancy.

And then everything becomes an erotic sexual fantasy as Phil’s bass chugs and Eric’s Hendrix-sque guitar psych sound and Eric’s pounding drums come in like a flaming fire of making love with Gonna Creep Up on You and it’s surprising that this would be the last album that Eric would be in the band during the making of the album because of the music business was changing and deciding to move on. The bonus tracks is now in full control features the A & B-side of the singles, Randolph’s Tango, a laid-back groovy ballad that pays tribute to the Argentina dance and Broken Dreams, which sort of realms of Zappa’s Stink Foot, is a killer track.

Here I Go Again has a Hawaiian beat as for the homage of Rod Stewart and the Faces comes in with Cruising with the Lizzymobile while Sitamoia carries an early punk rock sound resemblance of the Ramones. Now enter, the late great guitarist Gary Moore who appears on the 1977 remix of Slow Blues and crunchy roar of Little Darling. Gary is shining with his bluesy and metallic riffs and he knows he is not pulling any punches. Thin Lizzy, all of a sudden, had a hit single with the Irish traditional song, Whiskey in the Jar. They had finally broke through the champagne bottle and showing more fuel has been put into the car to get going.

The second half of the Deluxe Edition, it keeps getting better of the album features the band doing sessions at the BBC from 1973 to 1974 where the band were finally getting the recognition as they were promoting the third album and brought the electricity to the audience and the presenters as they got what the doctor ordered. The funk comes into the picture Showdown and Phil’s rough childhood to be the only black Irish member in the power metal anthem of Black Boys in the Corner.

After Eric Bell left the band, the band moved from a trio to a four piece. Enter Scott Gorham and Brian Robertson in which was now known the famous four-era as the fans love the era because of the dueling guitarist which would later influence Judas Priest and Iron Maiden also known as the New Wave of British Heavy Metal. Scott and Brian appeared in two albums: Nightlife and Fighting. By now the two guitarist were like boxers in the boxing match. Scott was more of Page sound while Brian had the elements that Eric Bell used from the Vagabonds-era as if Eric is watching over Robertson's guitar playing. They were thinking to see who can come up with the best rhythm and the best solos. The evidence is here with the breakthrough, Jailbreak. 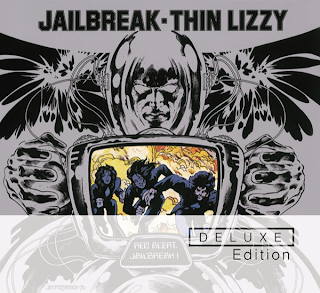 Originally released in 1976 on Lizzy’s new label Vertigo, Thin Lizzy broke through the mainstream and soon America came calling thanks to the two hit singles, The Boys Are Back in Town and the title track, it gave Thin Lizzy and Phil a huge boost and the songs keep on coming. While the punk scene was about to emerge, the band showed that they can be admired by the punks not to mention Steve Jones, Paul Cook of the Sex Pistols who would form the Greedies. But let’s get back to Jailbreak.

Jim Fitzpatrick, who did the artwork of the Vagabonds album, made Jailbreak almost look like something out of Stan Lee’s Marvel-era on the front cover as Phil was writing lyrics that had a comic-book feel to the album. You have the science-fiction forces of evil on Warriors, the Springsteen feel on Angel From The Coast and Romeo and the Lonely Girl, the country rock sounds of being a cowboy from Texas in the homage of John Ford’s Stagecoach on Cowboy Song which would later become a live fan favorite among Lizzy fans and the moody-sque soul sound that has it deal with either you live or die on Fight or Fall.

The early beginnings of NWOBHM is evidential here on the last finale of the thundering, Emerald. It has a Sword and Sorcery element feel as Scott and Brian go at it as Phil just lends his heart out with the sci-fi power of shock treatment as Downey just sounds like an early Lars Ulrich before the duo guitarists go into a middle-eastern midsection for a while and then go at it to see who can win the match. The bonus tracks are quite surprising to get your blood boiling for more to break out of prison to live to see the sunrise.

We have the remixes done by Scott Gorham and Def Leppard’s Joe Elliott as they dug up some of the multi-tracks that were heavily buried in the original release. On The Boys are Back in Town and Jailbreak which features a new intro done by Phil Lynott, there is new guitar playing done by Scott that completely blew me away including an alternate lyric version of the hit single of Boys. You could tell that Phil had to change the lyrics and the rest is history. We have again more of the BBC sessions in 1976 on John Peel’s show. Peel was a true champion of Thin Lizzy’s music and the band could prove no wrong to the late hero that Lizzy were on fire.

A studio version of Blues Boy and Derby Blues which was recorded at the Derby College of Technology in 1975, is an earlier version of Cowboy Song are quite surprising to see how Lizzy were going all Blues Rock and how the live version is much better than the studio version. Still after 41 years later, Thin Lizzy’s music keeps on growing and Phil Lynott’s legacy will live forever and years to come, the music again is an accomplished beginnings of hard rock.
Posted by znathanson at 6:27 PM