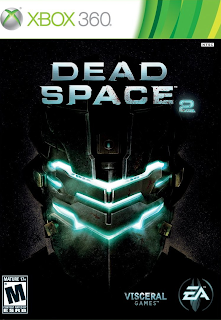 The last time we left engineer Isaac Clarke, he was on a repair mission to find out what were the problems on the USG Ishimura. When he was on board the ship, something went horribly wrong. But he had something important aboard the ship, Nicole Brennan, the love of his life. He tried to find her and get Nicole out of the ship, but what he saw in the ship was death, chaos, religious insanity, and the Marker. The ship was infected with this man-made device and it could be used to stop the necromorphs and the destruction. Everything went to hell in a hand basket including Nicole who committed suicide to escape the chaos. Even though Isaac was the only survivor left, the nightmare still haunts him three years after.

In the first Dead Space, Isaac was running errands for everybody, this time in the sequel, he is calling the shots. He isn’t a bombastic and pretentious superhero. He’s almost like a real person and the hallucinations continue to follow him to build up a magnetic mystery that follows him when you let him go to another direction and he’s got a voice done brilliantly by Gunner Wright. So you are not going hear do one-line movie quotes, but you can get the feel that the memories still haunt Isaac.

When I was playing Dead Space 2, I was asking myself, What the hell happened aboard the Ishimura? What he was doing those three years alone on his ship? And Why is dead girlfriend mighty pissed off at him? It becomes almost like a 2-part play that features an explosive finale in which is featured in a 2-disc format. Isolation is featured throughout the first 17-minutes and the scenes show in mystery and thriller.

As Isaac’s adventure in the Ishimura would be the last thing on his mind, his adventure’s on the Sprawl was just the beginning. Dead Space 2 is one of the most heart-stopping yet mind-boggling games I’ve enjoyed playing. The music that Jason Graves brings to the table is eerie, epic, and dramatic as he is in the footsteps of Profokiev, Stravinsky, Varese, and Borgo. Everytime you would hear Graves composition, it gives you a jump out of your seat sort of similar like Psycho and The Exorcist. Music plays an important role into the Dead Space franchise and featuring rumbling horn sections, dramatic string quartets, and different time-changes, it is worth the wait.

The sequel takes place three years after the events of the game and Isaac is aboard the Sprawl. The Sprawl is a space station that was built on Titan to be home for children going to school, people starting families, or take place in Unitology. But when there’s a new Marker, the infection got a lot worse. Which meant you have to fight your way through the Puker who would spray poisonous vomit, the Pack which look like fucked-up kids ready to tear Isaac’s body limb by limb, and not to mention one scene in where you are in the Elementary school where a teacher explodes after hugging the necromorph baby too much, you’ve got to give kudos to EA and Viscreal, that is another fucked-up scene that would make you say, “How the hell did they get away with it?!” Because they pushed the envelope a lot further than what we imagined.

Not only the Necromorphs are terrifying, I felt that Isaac lets them know he’s not afraid anymore. The monster’s weren’t slow like in the first one, but this time, they are faster and strong. Shooting off a limb and using kinesis and stabbing them either in the head or in the stomach to knock them over the wall which would be a perfect place for a hunting trophy for Isaac’s living room. There was one scary moment in the elementary I forgot to mention. You go inside this Auditorium and the eerie carnival music which pays homage to the Bioshock franchise, really gives you a creepy atmosphere on and that’s where you as the player realizes, “okay in about three seconds, I’m going to be killed one way or the other because I want to get the hell out of this damn place.” And then, swarms of the pack come charging and you shoot or punch them to get out of Isaac’s way.

I have to give kudos that the team and Steve Papoutsis has done, I imagine them thinking to themselves, we got something real and to please the fans and see where the Dead Space franchise would lead to them. But a little criticism won’t hurt Dead Space 2. The game is amazing and well done, but killing a Necromorph by using a lot of ammo would hurt big time for the player and finds out what to do next. When I was playing the game, I would sometimes use Kinesis most of the time while using stasis to cut off a limb and then using the kinesis and impaling their heads toward the wall or blast them out in space by shooting a window as they fly out but shooting the emergency door means you’re home safe, if you are very careful, but please watch what you shoot when you are at the disturbing atmosphere of the Church of Unitology not to mention the promos and the praises for founder Michael Altman.

I have played the game twice already and I’m about play it again. The multiplayer on the other hand, where players get to play as either Human or a Necromorph, is almost like a roller-coaster ride to hell. It’s team vs. team like a horrific boxing match in the realms of Clive Barker and Dario Argento as if they teamed up together to write a storyline for the multiplayer. I had fun playing both characters. The necromorphs which either it’s a packer or a disgusting foe makes it a disturbing momentum and a dark sense of humor Each point whether you work as a team to get 100 or 75 points are amazing. I reached level two in the game. So even though I’m not a wild fan of the multiplayer concept, I really enjoyed playing it.

Dead Space 2 is for me game of the year for 2011 and again disturbing, beautiful, and plot twists that will keep you guessing until the very end. Gunner Wright brings amazing talent to give Isaac a voice and even though I had mixed opinions of Isaac having a voice while he was a mute character in the first game, but his voice is spot-on. Not only Gunner brings a surprise performance of Isaac, but he goes inside the character while Tanya Clarke (no pun intended) who’s filling in for Iyari Limon, brings a bone-chilling yet sinister voice of Nicole’s darker side to taunt Isaac as she is ready to attack Isaac wherever he goes, she follows him to get revenge for leaving her on the Ishimura to die.

This is a great game and Isaac’s story is just begun. Let’s hope Viscreal and EA decide to tell the whole story of Isaac’s life from his rough childhood, meeting Nicole, his hatred of Unitology, and what happened after the events at Aegis 7. I hope they have something up their sleeves for Isaac Clarke.