The Fierce & The Dead - Part I 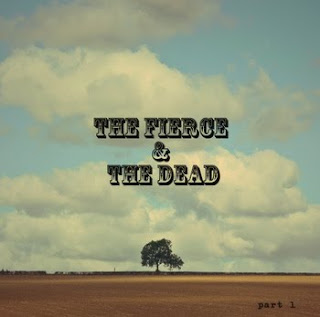 An unbelievable experimental adventure that Matt Stevens has cooked up with this twisted ride of the revival of the post-rock sound, Matt’s virtuoso has gone up a level with The Fierce and The Dead, a project that features Kev Feazy on Bass and Keyboards, and Stuart Marshall on drums & percussion. A perfect trio that follows in the footsteps of Radiohead, Mogwai, The Wall-era of Pink Floyd, and Krautrocker’s of the Avant-Garde, Faust. Even though this only a one-track EP, this is one hell of a ride that you are about to embark on for a very long time that the composition suggests, not to mention the beautiful cover.

Although Stevens layered and eerie guitar sound creates a disturbing tone that is in the realm of Jonny Greenwood, this a wonderful and attractive atmospheric music and weird travel of ambient noises that goes into various places of insanity, life, death, and rebirth in different changes of the instrumental piece that is only 18-minutes and 40-seconds. The piece starts off like a moody flowing gentle embrace that is like a glowing flower ready to burst hitting every note and voltage before going into an adventure of droning forces of evil.

It sends the listener’s ear to get them full and complete attention on what they are hearing on this composition and taking them into haunting places that they have never seen before with elements of the retro ‘70s German rock sound and synths going haywire almost sounding like a combination of a razor blade and a chainsaw making this loud and mind-craving noise that sounds like something out of a horror film as Feazy creates some Mogwai-like bass lines in the fuzz-tone value while Marshall’s drum patterns sound very much like Phil Selway. And then Matt calms the scenery with his jazzy improvisation for a good while to let the two members give some time to relax as they do an Indian tribe relative sound to set the scenery for Matt’s guitar playing.

And then all of a sudden, BAM! The band comes into a full circle like as if they are a gang band to release a sudden attack then followed by a psychedelic droning feedback amplification as the synth goes into an attack mode in the background. Treated as if Guitar, Synth, Bass, and Drums are giving Justin Bieber a heart attack in a BIG way, they do an homage of Tangerine Dream’s ‘70s atmospheric sound of Phaedra before going into the OK Computer-era with Marshall’s electronic sound of the drums as if it was made to be in the futuristic scene of the 22nd century. He is playing the drums like a thundering storm as Stevens and Fezey watch him to say, “Give all the energy you got and let’s take this home with a bang!”

After coming back with the drone sound, the bass joins in with the drums while Stevens creates an echoing improvisation on the guitar into a swirling whirlpool of terror like a Hitchock film score, the first part has been reached to inherit the earth…Volcanic, Erupted, and lava coming out to terrorize the pop sound of today’s bullshit of mainstream radio top 10 singles. Matt just comes swinging as he gives some Frippertronic guitar layered sound that is the signal of the waves to crash.

The last three minutes is Stevens doing his guitar work as he pays tribute to Greenwood, Fripp, and Lifeson as if it’s the calm of the storm in an eerie way with a clapping rhythm beat before the synth goes into a futuristic ending ala Argento style! As the level goes up into a serious haywire mode before going into a static and then ending into a sudden stop ala Beatles Abbey Road momentum. The soundscapes that the trio created on the first part of the Fierce and the Dead is almost as if it was recorded for the Pawn Hearts sessions for Van Der Graaf Generator. The recording in time changes, spaced-out adventures, mysterious finale, and all of this makes this composition The Fierce and The Dead’s evocative and haunting ingredients of a post-apocalyptic landscape.
Posted by znathanson at 9:23 PM