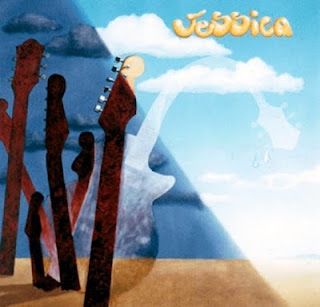 When most musicians and bands release material online like Matt Stevens does with Echo and Ghost, it feels as if the future awaits us for years to come and give the major record labels a chance to bow their knees over to. When you have guitarist and virtuoso Jeff Green releases Jessica online, is a tribute to her, the daughter he wished he got to know her, passed away in 1996 of oxygen deprivation. The album took about 11 years for him to finish and find his destiny to make an emotional yet beautiful in sweat and tears.

Like Neil Peart who went on a Motorcycle trip across the globe to find his true feelings after the loss of his wife and daughter, it is almost as if Jeff had to find himself and to see where the road would lay ahead for him. Jessica is where Jeff Green comes out like a flower getting ready to grow quickly. The first thing that moves you is his guitar playing of ambient new age sound which is shown on Willing The Clouds Away bearing a resemblance of an heartfelt white bird flying to the heavens as the moog solo gives an angelic touch while the guitar playing fills the void.

This isn’t just your typical progressive rock album, it’s more of an album to sink in and fill your heart and mind to see where you might be and the elements of Yes’s golden-era is quite evidential. You also have the spooky introduction called For The Future. The Future has a Tangerine Dream retro sound at first, before going into a Gilmour-sque layered guitar sound as if it’s crying for Jessica while it goes into a 70s-era of Genesis’ own Steve Hackett’s homage. It is quite an amazing composition though, because For The Future is Jeff’s road to healing and its finest peak.

The real short classical guitar instrumental piece that is rich with Horizons is on Visions while On This Night has a dramatic structure and the singing comes in. It is very powerful for him to come out of limelight and give all the energy he’s got to come and the race track is on for him. Pride sounds like something that was left off the Fragile sessions with some touching finger picking guitar work as Jeff sings about Jessica as if he is letting her know that he will always be with her no matter where the direction will go for him.

Essence is piano and keyboards that sound like an symphonic lullaby river into the passages of time with it’s classical boundaries that makes it very touching sound as Woman With Child carries the ‘80s New Wave of British Prog sound ala Marillion’s Clutching At Straws-era with it’s melodic passages and soaring background vocalization proves to be a one ticket to freedom. The short composition Being is a pastoral symphonic surround beauty as it segues into the dramatic mood for Jessie’s Theme.

Coming with a classical guitar, moog solo’s, Robert Fripp and Steve Hackett-sque guitar sound, atmospheric bass lines, and the drum tempo becoming an up beat tempo, it’s very much laid-back as you lie on the beach to watch the sun rise on the blue sky as the angelic vocals come in to let Jeff know that Jessica is watching Daddy every day. The groove funk is energetic and in full scale of tension on Jeff’s view on what he did wrong and how he would have changed differently to save Jessica’s life on Tomorrow Never Came and his anger is shown surprisingly to fill the situation on the loss of a child. Prittlewell Chase is a moody haunting celtic rock sound. With the eerie flute solo and acoustic guitar coming in hand, not only that it again is crying out for Jessica, but almost could have been a score for a horror film before going into the deeper realms of Radiohead and Porcupine Tree with it’s electronic rock sound of the ‘80s and ‘90s.

Closing track, Live Forever, provides a trusting finale, as Jeff lets Jessica reminding her that the magic he has is still inside him as it becomes an alternative rock format sparking balladry and opening their hearts to see where the destiny would lead them to. If it’s an album that you want to get, than there’s a lot of great music that is coming online to listen to get you in the mood for, if you are parent who lost their child and deciding what’s the next chapter will be for you, then Jeff Green’s Jessica’ remains an unbelievable debut album to give a huge listen to.
Posted by znathanson at 10:00 PM