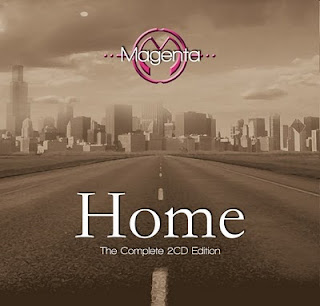 Originally released in 2006, the plot line of the album tells the story is set in the early days of the ‘70s of a woman who leaves her home in the Beatles hometown, Liverpool to move to New York City to find herself in America. Just like the special edition of their second album Seven, this is a 2-CD set of the band’s follow up and it comes with the full New York Suite that will take your breath away. What guitarist and lyricist Rob Reed wanted to make it originally like a play set to beautiful music, basically like a Rock Opera, but he decided to make the long compositions as a second CD instead because it wouldn’t fit the Woman’s story of searching for a new beginning in New York City.
Here on this Complete Edition of Home, it allows the piece to blossom like a sequel and helps deal with the Woman trying to fit in the scene as she arrives in New York City and to be a part of the in-crowd. The arranging and composition that is on this amazing 2-CD set, is absolutely glorious from start to finish. There’s a touch of the Steve Hackett-era of Genesis, Starcastle, Pink Floyd, and Yes combining together in a Welsh-like theater rock sound as Magenta makes the concept work on its own.
Vocalist Christina Booth brings a smooth and angelic sound to the Alternative Prog sound on Demons. She delivers a magnetism of energy of her musical backgrounds in her Celtic roots while the lead guitarists Chris Fry and Martin Rosser showcase their solo work for the introduction. The acoustic crystal sound of Morning Sunlight could have been the theme song of the Japanese animated TV series, Maria Watches Over Us as Rob Reed brings a crisp beauty on the rhythm section on the acoustic guitar while Hurt erupts into Genesis-styled Hackett wah-wah guitar riffs and Phil Collins-like drum sound that could have been used in the Trick of the Tail sessions.
They let the eerie balladry flow on the groundbreaking pastoral mourning rocker Moving On as Christina lets it out with emotions as Reed does some beautiful keyboard work as if it was a harpsichord to fit Booth’s image as the band spread their wings to the core. The Journey offers something a ‘70s groove with a Tony Banks style on the organ with a cool bass line done by Dan Fry while the piece is a laidback beauty of Selling England By The Pound as the epics including Arrival, Home From Home, and White Lies all are set to go in an ‘80s neo-prog tradition that Marillion could have done on Script for a Jester’s Tear composed by Rush.
The Visionary has a sinister introduction at first with guitar and synth dueling it out and then the line “The Time has come/the time to face the truth/The time has come/to face the hurt that’s born at youth.”
It has a strong lyrical element thanks to Reed and then Booth lets it out with more of her soaring up-to-the-heaven vocalization in the midsection with a charm that is out of this world. Journey’s End starts off as electric jazz-like fusion piano introduction then it goes into the Symphonic Rock mode which works very well as The Traveller’s Lament is a short number with Celtic Pipes setting the scenery as the last ballad number, Home could have been used in the Art theatre of London as a finale to let the listener know that everything’s okay and the dreams can come true. A great album and worth listening to enjoy Magenta's conceptual rock opera.
Posted by znathanson at 12:13 AM