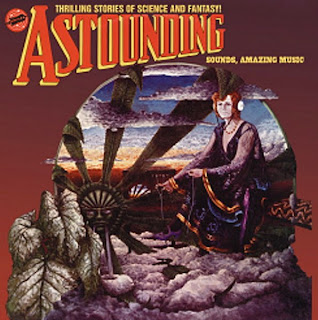 By now, you are familiar with Classic Rock Presents Prog motto: “Astounding Sounds, Amazing Music.” The title comes from Hawkwind’s follow up to Warrior on the Edge of Time as they were going through changes in 1975. Lemmy Kilmeister was sacked from the band after being arrested in the US/Canadian border after being found with Amphetamines as the band were embarking on the US tour. He was replaced by Pink Fairies bassist Paul Rudolph as they were touring while Nude goddess of the Space Ritual cover, Stacia departed from the band after the Reading Festival in 1975. However, the band headed back to the Roadhouse Studios as they were working on their next album. While it’s a divided relationship of drawing lines in the sand of Hawkwind fans on whether they love or hate this album, Astounding Sounds Amazing Music is like nothing you’ve ever heard from start to finish.
Released on the Charisma label in August 1976, it included a dazzling artwork done by Barney Bubbles as the album has a sci-fi comic book feel to it as in the inner sleeves feature parodic ads that would attribute the band’s image and their sense of humor. Years later, the album has been wonderfully re-mastered thanks to Mark Powell and the new Esoteric kid brother label which covers the Hawkwind catalogue, Atomhenge, it can be considered of pointing out the map for the space cadets in which they would push the envelope in excellent compositions and giving the album another chance for the fans to take a listen to again.
Astounding Sounds, Amazing Music is very Jazzy, Spacey, and all of the time Anti-Motorcycle Prog-Punk at its best. One of the tracks, City of Lagoons, goes to pay tribute to Frank Zappa’s Zoot Allures-era with it’s Space Funk attitude that would take listeners by surprise as for the opening track, Reefer Madness, an homage to the 1936 cult classic film as its done by Calvert’s quirky lyrics while guitarist Brock brings magic to this magnificent collaboration as if this was the pounding rockin’ theme song for the movie which would have the cast members roll over their graves to. Steppenwolf sounds like early Jazz-Punk sound of Santana as Brock’s music brings a chugging noir to pay tribute to Herman Hesse while (get this title) The Aubergine That Rangoon (sounds like a B-movie) is Hawkwind going 1982 with the New Wave sound that makes it very experimental as for the metallic raunchiness of Kerb Crawler.
Kadu Flyer starts with a synthesized adventure and then turned into a Middle-Eastern Indian Hard Rock tribe all over yo’ ass! The ambient dreamscape of Chronoglide Skyway has a similarity of Tangerine Dream and Brian Eno’s Music for Films homage to close the album. The bonus tracks are out of this world as well. You have the unearthed single which was originally going to be a part of Reefer Madness with Honky Dorky and the re-mix edition done by Pink Floyd’s David Gilmour of Kerb Crawler is out of this world while Back on the Streets sounds like Space Glam Punk sound of T. Rex meets The Damned. The last track, The Dream of Isis is an experimental touch of Synth and Bass lines that makes it very Gong-like. It’s hard to love Hawkwind’s material and listeners are still going back on the ship for an album that needs to be heard again.
Posted by znathanson at 12:48 AM