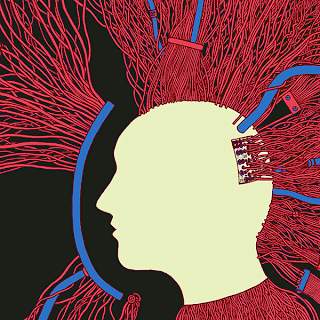 Indie prog label Rise Above Records to me, in my book, one of the greatest prog and doom metal labels to come out of this world thanks to Napalm Death’s Lee Dorrian. And they brought a band that is completely out of this world. Brighton’s Diagonal is bringing prog to the masses: psych-guitar licks, mellotron’s, fuzz tone organs, and odd time signatures that will take your breath away.

Some people might be mistaken for this band to come out of the ‘70s prog unit because of the art design and the way they pay tribute to the music scene and the instruments they bring to the table. So if you admire Van Der Graaf Generator, Nucleus, Pink Floyd, Locomotive, Aphrodite’s Child, and the Canterbury Music scene, this is right up in your alley. But let’s get right into the self-titled debut album and why this album kicks plenty of ass.

There’s a lot of heavy instrumental technique’s from most of the ‘70s sound. In here there’s huge difference, because you can tell that while they were in the studio making the album, they were listening to their heroes and see where the direction might lead them to the yellow brick road. Keyboardist Alex Crispin creates a dark and eerie atmosphere on the keyboards, but you can tell how much he does a lot of twisted sounds on the instrument.

You can tell that he admired keyboardist like: Mike Ratledge, Hugh Banton, Dave Stewart, Kerry Minnear, and Peter Bardens, but adding a strict motive. It goes for the same with the three guitarists David Wileman, Daniel Pomlett, and David Pomlet. They know they just aren’t playing to show off, but how to create some momentum and how they would take turns to solo. You can hear a bit of the Frank Zappa, Robert Fripp, and John McLaughlin homage’s in there.

What they do however, is adding a bit of color to most parts in the compositions. Same thing with Pomlett as he plays the Bass like a madman he could create bass lines to develop a mysterious force. But right now, the band is just getting started and while Diagonal are creating a huge buzz impressively, there are no excuses to say that this is one of the best new bands to come out of the woodwork. Amazingly, the infinite will show the wise men how damn good they really are.

Four songs and one instrumental all prove their time signatures, sinister backgrounds with a melodic sound, makes it sound like the eruption of a volcano that is about to blow. There is not a bad track on here that is absolutely mind-boggling than the opening 10-minute number, Semi Permeable Men-Brain. Opening with a psychedelic hypnotic guitar and keyboards shrieking into uncharted territories as it unfolds with a sneering sax solo, raunchy climaxes and avant-garde madness.

The number has a signature of ¾ and 6/8 and Diagonal is getting their kicks in the Prog dimension. Although epic, like a disturbing grindhouse film set to weird music, the band is extending the horizon. This is a good antidote on how Diagonal can take the 21st century by making it to push the envelope a bit further. At times, drummer Luke Foster plays like Bill Bruford and Elvin Jones at the same time to the mix as if it were the lost track on Larks Tongues in Aspic sessions.

Child of the Thundercloud represents an early take of Nucleus and Colosseum. It begins with a moody jazzy sound of the clarinet and piano and then all of a sudden everything runs like a speeding bullet as the piano goes faster and Luke is going batshit crazy on the drums to keep up with the pace to see who would win in the tournament. At times, it sounds like a futuristic version of Egg and very Space Rock at times.

In the midsection, it becomes a haunting percussion beast waking up and then the pounding piano gives us a wake-up call as the band go for a stop-and-go moment in the piece as they go Italian Prog for the last few minutes as if they were Quella Vecchia Locanda’s stepson, but with a ghost-like vocals setting up the scenery to close the track. Deathwatch isn’t your father’s prog rock, but it’s captures the spirit of Progressive Rock. Starting off with Electric Piano and Vocals setting a quiet eerie tone and then having a mixture of Crimson meets a Fusion version of A Love Supreme-era of John Coltrane, vocalist Alex Crispin keeps the beat flowing as the band follow him to where his vocals takes it to the angelic skies of heaven.

It becomes a vocalization of Gentle Giant in the piece and then the guitars do a virtuoso Gilmour-esque like style on the number that has a layered sound while the bass, keyboards, and drums go into orbit. It almost as if the band were writing a story as if it was a theatrical piece and proved successfully that it would be a benchmark in their years to come in the future. Fortunately, the last 53 seconds has a mellow groove that makes it a perfect introduction to the ‘60s TV series, The Outer Limits.

Cannon Missfire is a fierce instrumental number featuring guitarists Nick Richards and Dave Wileman as they go up and down the scale to pay tribute to Mr. Robert Fripp while bassist Dan Pomlett creates an interesting Jazz Fusion work representing the minds of a crossover with Jaco Pastorious meets Stanley Clarke bass lines throughout the composition. The piece is very laid back and sounding like a fierce cannon that went off like a rocket as they band go into outer space.

And then sax player, Nick Whittaker takes center stage to create a middle-eastern sound that makes it sound perfect to create a spooky version of David Jackson of VDGG fame. It stops for a second and the bass solo closes with guitar, drums, and keyboards to give it that early Peter Hammill style up your ass! The closing number, Pact, a 14-minute epic in the mind of The Nice and ELP is a perfect finale to see the band go off like fireworks. The Hammond and Guitar is spot-on while the Mellotron sets the tone of the atmosphere.

It’s very much in the mind of the Post Barrett-era of Pink Floyd as the lyrics are very disturbing and leading towards a dangerous path and finding out how everyone will go and the destruction will lead them to. The ¾ time signature waltz is a great mode and to give the instruments to go buck wild featuring a soaring keyboard section along with twisted guitar licks and seeing who would duke it out in the battlefield. In the last part of the piece, it sounds like an Ambient/Atmospheric new age sound ala Tangerine Dream Phaedra meets Zeit sound thanks to Ross Hassock on the synthesizer as he goes Edgar Froese to close the piece up as if he’s watching him and is very proud like if he’s his father and passing the torch to Diagonal.

With Diagonal spreading the prog circuit like wildfire, the band is definitely going to be the new kings of Progressive Rock and their intentions to create this magnificent debut monster is in the soaring skies. Their mission is accomplished with the ingredients of the work they might have in the making of their second album in their way and shoulders they might have up their sleeves.
Posted by znathanson at 12:15 AM