Bun Chakeze and Odin of London – Whose Dream 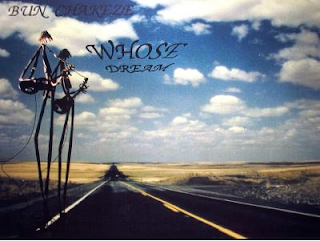 The unheard band that will take your breath away in Progressive Rock fire by Bun Chakeze and Odin of London, Whose Dream, the unreleased album shows a lot of lukewarm beauty on their website from Reverb Nation, on the tracks there is a lot of high energy and more high voltage than going for the big stadiums for arena rock. Odin’s formation in 1981 and Bun Chakeze in 1985, according to the bio, Odin had six members in the band it considered; guitarists Colin Tench and John Culley, Cliff Delighton, lyricist Gary Derrick, keyboardist Derek Sanderson, and Luke on vocals. Sadly, there were no gigs for the group as they decided to call it a day and formed Bun Chakeze and founded vocalist Joey Lugassy which has a vocalization in the mind of Peter Gabriel as they took six months to finish the album in 1986 and they called it a day.
Now with the tracks, the unreleased material is like nothing I’ve heard before. The music is a combination crossover of Jazz Fusion, Pink Floyd, and Genesis forming together to create a hypnotic beauty. Indeed this is one of the most dimensional compositions they’ve released online and you need to hear them. Midnight Skies proves to be a pleasant lukewarm coolness sound of Gilmour-esque guitar work and Tony Banks synth beauty in the mind of The Lamb Lies Down on Broadway thanks to Colin Tench, the track sounds like it could have been recorded for an animated epic film while the title track goes into an eerie dreamland calmness with an acoustic folk prog sound that is in the mind of Annie Haslam’s Renaissance-era.
The two bands were no strangers for their love of ‘70s progressive music, but on Flight of The Phoenix it has a mixture of crisp finger picking guitar sound and then turned into a hard rock tour de force that is out of this world. The Deal sounds almost like a sequel to Pink Floyd’s eerie synth rumbling number, Welcome to the Machine, with the guitar and synth sound like the Running Man as the vocals soars majestically in this homage to the 1982 cult classic, Blade Runner as Walk in Paradise comes to life. It has the ‘80s synth and sinister vocals and guitar work in different edits, but it’s great to hear by giving the listener to a journey of uncharted territories.
Long Distance Runner has a strong guitar and breathtaking vocal sounds with its complex storytelling beauty that is very much the homage to the game of The Legend of Zelda franchise while the vocalization has a strong element along with the ambient synthesizer setting in the background with more of the Floyd representation. Tench brings a dramatic sound to the guitar and synth as he helps the vocals go into the angelic sky. He is doing it very well and top notch to get you into the unearthed sound of Experimental Music.
A Handful of Rice has a bit of the darkness value in the mind of Van Der Graaf Generator meets Return To Forever. The edit features a percussion solo along with a bass solo that is very jazzy in the mind of Stanley Clarke and Jaco Pastorious. It is not a bad track, but hopefully we’ll get to hear the full-length version of the track one day, pretty damn good. If the prog bands had a huge comeback probably at Carnegie Hall, Odin of London and Bum Chakeze would be there as well to give us a warm response and will find more light at the end of the tunnel.
Posted by znathanson at 8:37 PM