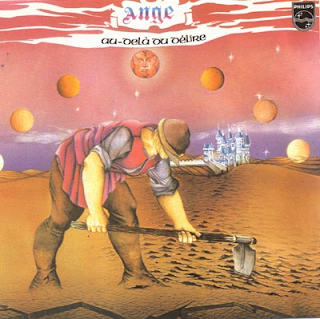 While everyone pays tribute to the Art Rock masterminds of Peter Gabriel from his days in Genesis from 1967 to 1975 and the early King Crimson, it’s hard to describe French masters, Ange thanks to lead vocalist and front man of the band, Christian Decamps and his brother, keyboardist Francis Decamps. Their music is very theatrical and almost a combination of Lewis Carroll and Edgar Allen Poe in a poetic way. It’s been quite clear that they wanted to be quite clear and understood that they are not fooling around since following up to their first two albums, Caricatures and Le Cimetiere Des Arlequins, have already achieved their status.

Since they were the French version of Genesis and opened for them at the Reading Festival in 1973, they knew they were up to something, but it allowed the French progsters the room to take the music into something that was dramatic and added tension than wearing a fox’s head and shaving your head in a funny way. They are not like the Beatles and were never mainstream like also for good reasons. What makes this band so amazing is they would give their heart and souls to expand the follow up to their second album. It was for Christian’s brother, Francis to extend his keyboard mellotron-like sound on the Viscount Organ to make it more orchestral and a flourished dreamland sound along with the members as well.

Guitarist Jean Michel Brezovar isn’t like Jimmy Page and Jeff Beck, he is more of a crossover of Robert Fripp, Steve Hackett, and Andy Latimer and he knows where the score will lead, but he’ll know when it’s time for the Decamp brothers to let him know to give some space for other members. Same thing with bassist Daniel Haas, you can tell why he wanted to be in Ange. He adds a bit of the psychedelic and jazz touches on the bass and adding flavor to most of the songs and not trying to show off for any reason.

As for drummer Gerald Jelsch, he goes beyond the boundaries and develops into a mystical touch on the kit to see where Ange takes the music on the magic carpet and see which location they might land on through time signatures, bizarre fairytales, and impressive key moments throughout the songs and instrumental they share throughout. What makes Au-Dela Du Delire so damn good that isn’t just a progressive rock album, but an album that could be as theatrical and hard to understand what they want to do on the fourth album. Again, there is the Genesis or the Le Orme influence in some of the pieces as well as the Greg Lake-era of King Crimson direction in unbelievable moments, but Ange have a huge inspiration and a sound that makes them ahead of their time.

There are no words to describe than the Gothic Symphonic Rock section twist of Godevin Le Vilain. Opening with a haunting introduction and outro violin solo done by Henry Loustau, the track unfolds like a flower and makes it very attractive for listeners to get a taste of this number. It has the Wicker Man meets the Virgin Spring altitude like a disturbing tale from the Grimm Brothers as it unfolds in a harpsichord voltage, shattering mellotron organ sounds, and hard eclectic guitar work.

Les Longues Nuits D’isaac is a heavy metal force. In the number, Jean takes the guitar to uncharted territory with Acid Folk and Sabbath-like sound while Francis creates a layered background on the Viscount Organ as they combine together in a disturbing couple that makes it fit so perfectly, that you couldn’t let go of the number. Christian here, he sounds like a mad scientist and then as Dr. Jekyll in the midsection as he goes back into Mr. Hyde with the shouting as he and the band go up the horror background.

Si J’etais Le Messie has a very moody traditional jazz turned epic rock. Christian begins his narration as if he’s in the Arkham Asylum like a psychotic with hell on wheels as he is calm and crazy like then he lets out like a madman as if he imagines himself if he were the messiah. The lyrics are very twisted and a quirky sense of humor, almost like a nightmare that has come to life to give Religion a good old kick in the ass. Ballade Pour Une Orgie on the other hand, is a whimsical touch in the mind of Steve Hackett’s guitar playing thanks to Jean Michel as he and Decamps paint a bloody aftermath of war as hell comes to life after the ruler takes over the king’s assassination to get pissed and destroy the castle, anarchy style!

Elsewhere, Exode is driven by a weird medieval keyboard introduction, ballad drum style, Renaissance acoustic guitar rhythm sound as the melodies hint here that Ange are paying homage to the 7-minute epic, The Fountain of Salmacis. It has a double track vocal sound that if Christian had cloned himself to sing this wonderful little whimsical ditty as it sounds like a perfect dance composition recorded in the 18th century in the French Opera House and then turned into a climatic driven force with the guitar just flying off the masquerade party. Meanwhile, La Bataille Du Sucre, begins with a carousel sound with Christian doing his Oscar Wilde take.

The lyrics have a strange tale as he and his brother take turns for a moment to sing and give a young man named Eric Bibonne to make a cameo by giving his narration on the piece. The music has a post-apocalyptic background with the organ, bass, and drums have a defining moment as it becomes a haunting melody for the last few minutes to see that the carnival that it was originally a place to be, gone into hell in a handbasket as the guitar comes in to give it a layered yet mourning sound. Fils De Lumiere, could have been a hit single and an anthem for Ange’s career.

It’s one of the band’s favorite and a live one as well featuring with a flaming keyboard and drum works setting up the fire-like explosion. More of the Dramatic touches of the Symphonic Rock sound with ambient and crazy guitar work throughout the finale as it lets the curtain to get ready to close down with the title track that is 8-minutes. The Segue to Fils De Lumeire, is a classical calmness. It’s again the Renaissace festival sound with more of the Gabriel-era sound of Genesis tribute to the core. It’s interesting, though, not only the music is amazing, the lyrics that Christian does, he is doing it like a conductor and telling the band where the second half will take them.

The second half is magnificent. The keyboards, strong driven rhythm section, and a guitar part that you can definitely feel the emotions throughout the piece to give it that climatic closing. All in all, Au-Dela Du Deliere is a breathtaking and magnificent record that can be ranked among the Symphonic Rock sound of the ‘70s from any Decamps and Gabriel homage to get the wagon back on the wheel again.
Posted by znathanson at 5:52 PM