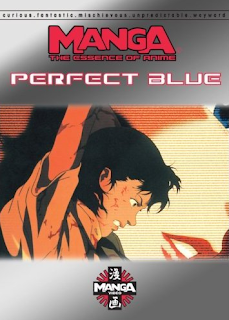 Some Anime had become very childlike in the late ‘90s with Pokemon, Digimon, and the franchise of Dragon Ball Z. But for Anime film director, Satoshi Kon, he pushed the envelope a bit further. He sadly passed away due to a battle of pancreatic cancer at the age of 46. My thoughts and prayers are with his family and of course to Madhouse Studios where Kon directed his animated films.

I first became aware of Satoshi Kon’s work back in the Winter of 2004 after I was finished with High School. The film that caught my attention was the disturbing anime classic, Perfect Blue in 1998. It had the mixtures of Alfred Hitchcock meets Dario Argento. The story of a Pop Idol who makes an announcement of retiring from the music scene to pursue an acting career in a controversial soap opera which I can’t spoil until you’ve seen the film. There was a negative reaction of her fans for Mima to go to another direction including a stalker by the name of Me-Mania who has an obsessive crush on her. While this is going on, Mima’s career goes into a downward spiral and her troubles have only just begun.

After I first watched it on Cable TV, It scared me. It scared me because I didn’t quite get it. But then watching the movie a few times, I could see where Kon was going through. When you look at Satoshi Kon’s work, I became hooked into his work and the way his animation was about to burst down the door like hell on wheels. Whether it’s the designs, the characters, or, the setting, his films took me on a ride I’ll never forget.

I still have a softspot for Tokyo Godfathers, the series Paranoia Agent, and Millennium Actress. I’m not a wild fan of those two movies, but I do enjoy them very much and a huge fan of Paranoia Agent as well. His styles and the tribute to filmmakers Seven Samurai’s Akira Kurosawa and Stagecoach director John Ford. You can tell that he admired the filmmakers and paid homage to his heroes in film. Back in 2007, another trailer that I remember looking at was another project he was completed was, Paprika, based on the novel by Yasutaka Tsutsui in 1993.

The movie itself was like nothing I’ve seen before. The story of a new device done by a researcher who uses it on patients to go on a futuristic world in their dreams which would have made Philip K. Dick very happy to write about if he was still alive today. It’s still one of the most spiritual animated films I enjoyed watching since Ghost in the Shell and Heavy Metal. What Kon did in Paprika, he wanted to bring the moments in film to another dimension.

The beautiful animated art work in the world of 3D and high definition is like you’ve entered the mind of Kon. Now that he’s gone, the legacy of Satoshi Kon will live on as his last project, The Dream Machine is unknown right now due to his passing. Kon is the Stanley Kubrick of Japanese Animation. And his legacy will live on.