The Parlour Band - Is A Friend? 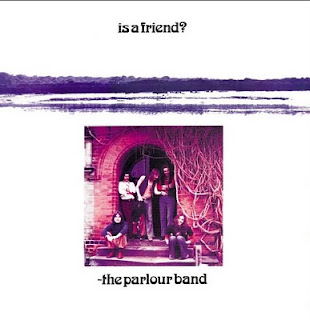 The Parlour Band were from the Channel Islands of Jersey featuring Peter Filleul (Lead Vocals, Keyboards, Rhythm Guitar), Jon ‘Pix’ Pickford (Vocals on Evensong, Wah-Wah Guitar), Craig Anders (Vocals, Electric and Acoustic Guitar), Mark Ashley Anders (Bass Guitar), and Jerry Robins (Drums). They started out as a hard rock band by the name of Rockbottom by doing several gigs in Jersey. The music scene during that time period in Jersey was magnetic and animated as the five musicians came together to form this bad.
When their debut album, Is a Friend?, first came out in 1972 after being recorded at Decca’s Tollington Park in late December of 1971, their were an opening band with Canterbury heroes Caravan and Khan which featured Gong’s guitarist Steve Hillage. They played at Universities, Town Halls in the United Kingdom and then changed their name to ‘A Band Called O’ (not to be mistaken of Shakespeare’s Othello). They went well in the European markets including the Reading Festival and supporters including John Peel and on The Old Grey Whistle Test featuring host “Whispering” Bob Harris.
As they received a huge following, the band called it a day in 1977 as the Punk scene was about to grow. This album is not just a classic masterpiece, but an album that will take your breath away and opening up the doors to hear unsung bands that never saw the light at the end of the tunnel for mainstream success that would have waited for them. As for the wah-wah guitar sounding very spacey, Pickford plays some straightforward guitar layered sound on Is A Friend? But there’s a surprising touch of evidence here, as he brings the vocals to shine for the first time on the dramatic punch on Evening as Pickford sets the mood and the tone of a world of eerie classical homage of Darryl Way’s Wolf’s third album, Night Music. Forgotten Dreams is an organ blues rock sound in the mind of early Deep Purple meets Man while Pretty Haired Girl sounds like a country rock song in the mind of the tragic singer-songwriter of the Flying Burrito Brothers, Gram Parsons. Spring and Sweet Comfort’s dreamlike Barclay James Harvest atmosphere are taken over by the echoing voice of Filleul and his acoustic guitar along with the brother Anders, Craig and Mark creating a psychedelic touch in the mind of The Grateful Dead while Early Morning Eyes is a dark folk hard rock conga/percussion pounding ballad done by Jerry Robins.
Follow Me could have been an FM hit with it’s acoustic catchy upbeats and Queen-like sound thanks to Craig Anders and Pete Filleul doing an homage to Brian May’s guitar work in the early Queen albums (pre-Night At The Opera era) as for Don’t Be Sad is in a finger picking-like sound along with Pete’s keyboards sounding almost like a mourning to cheer people up to be happy. Little Goldie recalls a moody-background of Spring’s debut album as To Happiness sounds like a Pastoral harder version of The Zombies Odyssey and Oracle as if it was played by The Moody Blues. They save the best for two tracks: The 7-minute Home has a concept rock opera technique and the bonus track, the raunchy Runaround sounds like a groovy jam session of Man with a brass section coming in to close the album with Angel Easy vibrators.
It’s a pity that this band never saw the light of day to give across this unbelievable debut.
Posted by znathanson at 7:01 PM