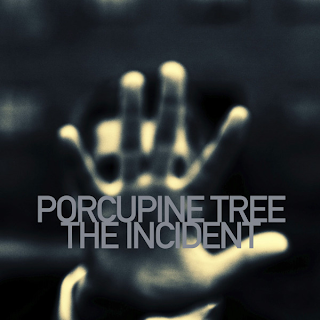 It’s hard to understand about Porcupine Tree and the way they play. The Incident, their tenth album to the follow up, Fear of a Blank Planet, is one of the most terrifying yet magnificent albums that Porcupine Tree has released. It still carries the ‘70s vibe of Progressive and Experimental Rock along with Alternative Rock as well. The concept in the production work that Steven Wilson carries the image of the band’s territory comes to work like a flaming fire as the guitar layered sound, ambient/atmospheric background music, and the dynamic grows very well that gives it a wake-up call by giving the band a warm hand shake.

But all in all, The Incident is Porcupine Tree’s baby they have brought to the fans of Prog geeks including myself. Underneath the fireplace that has brought around the mind of Steven Wilson, what is unbelievable about the music is the striking force on the compositions they would bring to the sessions that makes the music sound like it’s the 30th century since Stupid Dream and The Sky Moves Sideways. What Wilson has done, he has been doing a lot of research to come up with another concept album which was based on a motorway traffic jam that he was caught up in.

Since dealing with the issues of Reality shows, MTV, and Alienation on their previous album, their new album has put Porcupine Tree up to the max. Following into the footsteps of Pink Floyd’s story-telling music and the revival of Progressive Rock from eerie and moody music to the world of unbelievable reality for their fans to sink their teeth into by putting themselves on the road that most musicians to pass the torch to a younger new generation of progressive music to see how good music really is instead of all that fucking shit thanks to the so-called being a cocksucking star on American Idol. Where Wilson’s influences from: Robert Fripp, Roger Waters, Thom Yorke, and NEU! Let him embarked in his creation and embarked on an amazing adventure that he would come up with.

While The Incident may have a love/hate relationship with the PT fans because of the weirdness and mind-boggling work that the band put their heart and soul into, it becomes understandable that, since it may not be everyone’s cup of coffee, it makes a powerful shifting magnetic work. They moved away the Radiohead and ‘80s sound of Floyd on In Absentia and Signify, to more of an autobiographical story which instead of fairy-tale lyrics it has become more of a mysterious sketch in a double-CD format style from the loose-ends of impotence and difficult relationships that come aboard the other side of life.

The album kicks off with the shattering, disturbing guitar layered explosion on Occam’s Razor, to the sneering twists of Post Rock sounds on The Blind House that would give a lot of opportunities for Steven Wilson’s emotional sounds that makes it a pounding glowing light. It has a bit of the Tool and ‘90s sound of King Crimson’s THRAK-era, but it is very urgent and galactic of electricity. Meanwhile, Great Expectations acoustical moody last rites lyrics that would give it a calm-like guitar work while Steven’s vocal arrangements, sounds like a flying angel with a ghost-like tone from the state of isolation and having a nervous breakdown.

Alongside the spacey guitar work, there is the driving rhythm section thanks to bassist Colin Edwin, drummer Gavin Harrison, and keyboardist Richard Barbieri who brings an ethnical sound to The Incident that makes it very thrilling and dramatic that surrounds the concept of the music. Drawing The Line at first sounds like a Crimson-like ballad and then turned into a pounding upbeat Alternative rock midsection that would have made Thom Yorke and Jonny Greenwood’s feet tickled. The title track is an electrical accompaniment thanks to Wilson as he breaks free in the music format that he loves. You have the fierce guitar rhythm sounding like the apocalypse, keyboards sounding like a cross between the Kid A and In Rainbows format of a mad scientist mixing those two formats together and making it sound like 1978 all over again.

But damn! They are playing their hearts out at this number. With a lot of amazing albums to come out of the 20th century, the sound of music is how it’s supposed to be and how the fans are going to appreciate it with new effects that come along the way. It’s just sounds unbelievable and new the way that the sound is very much of futuristic rock taste of Porcupine Tree.

It’s like you’ve come back home from fighting for your troops in Iraq and seeing you have a brand new baby that your wife has brought to this world to show how much you care and love your family in a big way. That’s how The Incident is very different, but appealing like you’ve never heard it before. The centerpiece of the album is the 11-minute epic, Time Flies. Wilson delivers the line that would remain a history of Progressive Rock. He sings the line as he goes into a Pink Floyd Dogs homage sound on the jingling acoustic guitar strumming with; “I was born in ‘67/The year of Sgt. Pepper and Are You Experienced?/Into a suburban heaven yeah it should've been forever/It all seems to make so much sense/But after a while you realize time flies/And the best thing that you can do/Is take whatever comes to you because time flies.”

You can tell that Wilson is very disappointed and not in a good mood as it deals with how the time goes by very quickly and knowing that during the end of the number you will know that the journey of a song that life goes by really fast. The sections on Time Flies turn into a sorrowful ballad – The heartfelt opening, the disturbing silence on guitar and dalek-like guitar sounds that is very much a representative of King Crimson’s Red-era before going back into a back to normal ending. So the question you might ask, “What the hell happens next?”

Well, there’s the metal touch of Degree Zero of Liberty and then goes back into more of the quality back into the difficult mode format of abrasive fierce competition on; Octane Twisted, The Séance, and Circle of Manias before closing on the folk-like ending twist on I Drive the Hearse. The bonus on the second CD makes it feel like an EP for The Incident and it works well for Porcupine Tree. The ambient, spooky introduction of Flicker makes it very spectacular as it segues into the format of Kraftwerk meets the Dark Side of the Moon-era of Pink Floyd on Bonnie the Cat.

The Black Dahlia gives you a touch of the OK Computer format into a whirlpool dimension of a dreamland sequence while the finale Remember Me Lover closes the four-track album with an on the road trip song. It makes The Incident very comfy and helps cover the bases of Porcupine Tree’s format with the seven-minute number which would make the headphone master have a true love of the band’s music. It ends with a climatic ending with guitars and drums going up to the solar system before ending with a disturbing silence, adding guitar riffs and fierce melodic backgrounds of all guitars.

Porcupine Tree’s music makes it better than ever with The Incident. It is by fare one of the best things that are the amazing things to work on the best of the best. With this album, it puts Porcupine Tree and Steven Wilson to put everything a calm after the storm.
Posted by znathanson at 9:07 PM