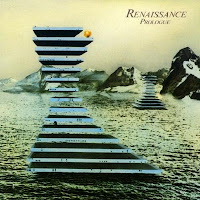 This is another special edition review due to Renaissance celebrating their 40th anniversary while embarking on a new concert tour date this summer and working on a new album and an EP called, The Mystic and the Muse. Their third release in 1972 was the album that finally put Renaissance on the map, with the help of new female vocalist Annie Haslam. The band were almost in limbo due to new management disbanding the first mark of the lineup which featured Keith Relf of the Yardbirds fame, and featured new members Annie Haslam on vocals and keyboardist John Tout to create a new sound while the band were starting to get up to move from the psychedelic sound into more of a Classical Rock band.
While Ashes Are Burning got them recognition, Prologue was only the beginning for Renaissance in which would be their “debut” album. Formed in 1969, Renaissance was coming out of the ashes of the mod band The Yardbirds as two of the members Keith Relf and Jim McCarty wanted to start a new group that was experimental from the sound of Folk and early Symphonic back in London, England. The band consisted bassist Louis Cennamo, pianist John Hawken and Keith’s younger sister Jane as backing vocalist as they were about to embark on a tour in the summer of ’69, but only with Festivals in two countried at Belgium and France. As they were getting ready to go the United States, they knew they could not bring the sound to a wider audience as they dissolved, thus MK I was done, MK II was just the beginning.
Prologue was recorded during only new members with; guitarist Rob Hendry, bassist John Camp, and drummer Terrence Sullivan. Featuring a gorgeous piano introduction on the opening title track as an homage to Chopin’s Etude Op. 10, No. 12, is a dazzling symphonic passages that Tout does in this magnificent instrumental number that would mark the band into Symphonic territory. The introduction of Annie’s voice is heaven in the perfect sense of the word, touching while lyricist Betty Thatcher’s gorgeous songs fills with emotion and beauty including the love song boundary of Spare Some Love and the oceanic mood piano from Sounds of the Sea. Kiev introduces some of Tout’s piano compositions, reminiscent of Keith Emerson as John Camp makes his vocal debut with help from Annie as Hendry’s guitar almost sounds like a violin on this romantic story with a style of an eerie version of Emerson, Lake and Palmer.
There is very much a folksy crisp on Bound For Infinity on which the instruments are very calm and quiet as the album closes with the climatic 11-minute epic, Rajah Khan. It starts off with Hendry’s guitar playing similar to Jimmy Page’s White Summer/Black Mountain Side as he takes over with a Middle-Eastern dramatic solo for the first two minutes as the band embark on an ambient Egyptian haunting instrumental with Annie’s vocalization coming up with an mourning organ solo and a dynamic VCS3 solo that won’t scare you, but will take your breath away for a mind-boggling jam. Prologue didn’t charted, but they received radio airplay in the states in Cleveland with the song Spare Some Love and soon they received word-of-mouth from Prog fans. Prologue still sounds amazing and ahead of it’s time, the influences continues especially from Welsh female progsters, Magenta.
Posted by znathanson at 6:12 PM