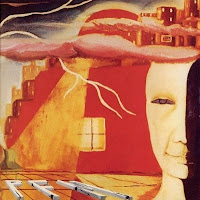 Italy, home for Classical Music and Opera, it appears to be one of the effects to meld them together seriously that was coming out of the pond in Great Britain: Progressive Rock. With Van Der Graaf Generator’s Pawn Hearts album sky rocketing to the Italian Charts at number one and Genesis, ELP and Gentle Giant were receiving word of mouth. Premiata Forneria Marconi (PFM) knew they wanted to hit the International market. When they formed in 1970 in Milan and taking their name from a small bakery in Brescia which is called “the Lioness of Italy” between Lombardy on the north side of Italy and situated at the foot of the Alps near the commune of San Zeno Navigilo, the group won a contest at the first music festival in Viareggio and signed with the Italian label, Numero Uno as they began to work on their debut album.
With a touch of Classical Guitar-swayed in Moog and Mellotron story-telling songs that paid tribute to Lewis Carroll, Antonio Vivaldi and Claudio Monteverdi rather than the so-called rockabilly sounds of the ‘50s. Their first album, Storia Di Un Minuto (History in a Minute) was recorded in 1971 as they began to show they were creating magic just as the United Kingdom had a heart of gold with their Prog scenery that was spreading like hotcakes. When they were working on their debut masterpiece, they knew they had something up their sleeves and the Italian charts were on the spot, already with a hit single also to keep the beast awake and the beat flowing.
There were surprises, also: not to mention the band’s momentum and five centerpieces that will blow Yes away. The segue of the mourning guitar done by Franco Mussida as he sets an folksy turned eerie glorified moog introduction of Introduzione while Impressioni Di Settembre becomes a dramatic/classical piece that is set in a church that has a perfect atmosphere with the structures that is mind-blowing than ever featuring the keyboards doing a beautiful solo. The piece is much in the range of Genesis meets Barclay James Harvest that closes with a finale that will surprise you.
E’ Festa in which later it would become Celebration, shows the band going high voltage, medieval, and hard rock with time changes, a humor of opera vocals and then it calms down and then goes back into the punch. More of the dramatic mountain top is La Caorzza di Hans, another twisted tune, that starts out very hard rock mixed with Baroque Classical Music sounds of the 15th century, Spanish guitar finger picking techniques tossing it up with a Jazz fusion boogie with a violin shriek solo done by Pagani as it goes into a Gentle Giant mode as if he is Darryl Way to create a sequel to The Good, The Bad and the Ugly. Grazie Diverio, sounds similar to an Italian version of Pink Floyd’s Brain Damage which the guitars and the band come to the Symphonic mode of treatment as the vocals sound as if they were double-tracked and then it becomes a twisted Broadway finale with an orchestra under the podium following the band to close the track to understand PFM’s mode of Orchestral rock.
PFM soon took notice with a little help from Greg Lake of ELP fame, who admired PFM, signed them to ELP’s label Manticore in 1975 and recorded English versions of their songs – which is soon got them into the mainstream, but a cult following they deserved. Though they took a long break in the late '80s, they came back in the late '90s and releasing Stati di Immaginazione in 2006, it seems very well and straight on top. Storia Di Un Minuto might be the album to get you started on the history of Italian Progressive Rock
Posted by znathanson at 11:23 PM

Sounds like a great record have you heard Cos?

No I haven't heard about that band. What is Cos' music like?