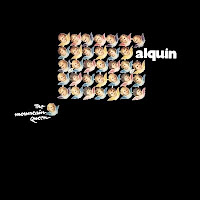 Alquin were almost sort of Dutch’s own answer to the Canterbury scene mixed with Soft Machine, Gentle Giant, Pink Floyd, Roxy Music, and even Black Sabbath meets Jethro Tull. They grew out of the College University in Delft around at the end of 1969 out of the ashes of a blues-based band called Threshold Fear as a six-piece band which are; bassist Hein Mars, sax and flute Ronald Ottenhoff, keyboardist Dick Fransen, drummer Paul Weststrate, guitarist and vocals Ferdinand Bakker, and sax Jon Tarenskeen. You can definitely tell there was some magic going on with their second album, The Mountain Queen, which was a follow up to their debut album, Marks.
The result is an adventurous ride into sonic jazz fusion at one time while another sounds very pre-Scorpions at times with a Celtic ragtime boogie if you are interested to get into some heavy oddball situations in a good way. Rejoicing with wah-wah guitar solos, fusion-like drum patterns and bass lines, and an organ that is destined to serve you amazing fine dinner on your next flight to another dimension that is destined for a soft landing as the saxes go flying off the wall to give you a lovely hot cup of tea. Quirky, fast, and a roller-coaster ride with a title that is very fantasy-like with a cover that seems very much a 1930’s addictive to dolls.
Whether the music is too difficult or jazzy, Alquin always shines through very brightly. It really brings the band together and the ingredients it needs to create a wonderful sound. Beginning with the 13-minute opening track, The Dance, it starts off with a Yes-keyboard riff that is joined with the horn section giving it a hard beat while the guitars sound very hard and folksy at the same time to set the mood for this upbeat and atmospheric composition.
Soft-Eyed Woman is a moody piece which is in the reins of Camel meets Atom Heart Mother-era of Pink Floyd while Convicts of the Air features a riff on the guitar that could have got the Scorpions influenced to write their anthem Rock You Like a Hurricane, but it’s into the Canterbury homage with a catchy melody that is very much AOR (Album-Orientated Rock). The 14-minute title-track starts off with a marching introduction as it goes into a sax section and calm-like vocals as it becomes crisp and lukewarm tune before leaping forward into almost like a Grateful Dead meets Gentle Giant jam session where the instruments fight to the finish line which is almost like a battlefield for the band members to do a battle to see which instrument would win. Don and Dewey (which sounds almost like a pub) is very much an eerie violin solo turned 12-bar ragtime blues as it gets into the segue of the long title – Mr. Barnum Junior’s Magnificent and Fabulous City (Part One).
It’s very much the tradition of the homage of Bebop Jazz meets Scott Joplin set in the ‘70s in an Emerson, Lake and Palmer type of sound and then it calms down with the violin setting the scenery as it becomes fresh again to close it up with a dramatic climax that will take your breath away ala Focus style This lavish reissue features liner notes done by Wouter Bessels which covers the history of the band and their career. If you love jazz fusion or want to check out why this band were way out in the Canterbury scene this is worth checking out. You won't believe your ears from what you will hear from the time you play it.
Posted by znathanson at 9:02 AM