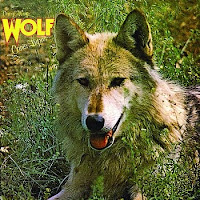 Formed in 1973 by electric violinist, Darryl Way who left Curved Air to embark on a solo career, Wolf’s music was a mixture of classical music, hard rock, and twisted folksy lyrics that was out there for his former band members to handle down the road with wild violin solos with improvisation’s going off the manuscript and time changes for an orchestra to handle. Even though they were short lived with only three albums up their sleeve which would explain why Darryl decided to take a small break with Curved Air to come with a lush-like album that is magnificent. He is one of the most underrated musicians to come out of the underground prog rock scene of the ‘70s and Canis Lupis, their second album, is a cornerstone of the cult prog album to come out of the decade.
Opening with the Morse Code turned dream-like rock sound of The Void, it replete with John Etheridge’s guitar work and crisp vocals from John Hodkinson which has the calm after the storm sound with a motion structured to create a flow that is after the nightmare in space surrounding the floating atmosphere, Wolf could have been Curved Air’s kid sister that brings this to be almost a sequel of Air Conditioning with less of the Jazz fusion-era and more bits and pieces of Symphonic Prog Folk Rock into the infinite.
The bass line done by Dek Messecar is very Jazzy as he comes to the center stage with the rough rocker Isolation Waltz with Way coming in to do his solo as he and Dek do a marching solo as drummer Ian Mosley (Marillion) follows them in the patterns they follow. Go Down is Etheridge’s acoustic guitar composition that is very folk-like and very fusion while Wolf is very spacey beginning with that synthesizer done by Way himself who wasn’t trying to be like Rick Wakeman, but he created a Space beauty that is spot on to provide a momentary of him creating the scenery with the synth and the dramatic violin solo to create a melodic tone rather than a charm of quirkiness.
Cadenza is probably the screeching complex that Darryl himself has done to this as he goes almost Le Orme meets New Trolls sound in this number with a heavy composition of the Synth screaming like mad as Way himself is coming up with heavy speed racer violin solos along with John’s guitar playing that he is brining to the table to come up with heavy time changes that makes it a fun number as if it’s to pay tribute to Gentle Giant with an Italian Prog feel.
Chanson Sans Paroles could have been recorded in the 15th century in Italy with Vivaldi’s The Four Seasons, but it is classical in a baroque kind of way with some fine melodic structures done by the band to create at first baroque turned into a dark nightclub somewhere in the Jazz clubs in New York as it calms down in a moody sense that gives you a feel of being in the shoes of a mastermind behind the violin, rather than a fiddler on a small roof.
It’s laidback, but eerie at the same time it is also, impressive. McDonald’s Lament (homage to King Crimson’s Ian McDonald, who produced the album) is a small tribute to him as Darryl begins to give the listener his quiet side with this 7-minute charm which brings the John Wetton-era of King Crimson and some sweet beauty also. This is a joyous essential listening album and to Darryl Way to bring him back to the limelight and forefront with Curved Air.
Posted by znathanson at 11:17 AM