Breathing Space - Coming Up For Air 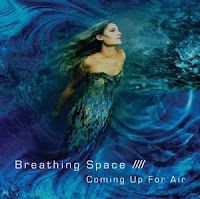 With a strong influence of Kate Bush and early Marillion, the concept works perfectly. Breathing Space’s second album, Coming Up For Air is an explosive album from the brainchild of Mostly Autumn’s keyboardist, Iain Jennings. Formed in 2005 in the UK, Iain wanted to pursue a solo career and so he brought musicians, drummer Barry Cassels, guitarist Mark Rowen, his brother Ben Jennings on keyboards, bassist Paul Teasdale, and vocalist Olivia Sparnenn. What started out as a solo project has turned into a band that delivers a big surprise that no other prog band can try to endure?
Coming Up For Air, Breathing Space’s 2007 follow up to the solo work doe by Iain Jennings, is late ‘70s and early ‘80s New Wave of British Progressive Rock in the true sense of the 21st century. Since Olivia’s voice brings the Breathing Space sound to a new level, listeners will definitely accept the underground Broadway Rock musical sound that one of the songs delivered. One example is the mid-tempo upbeat number, Time Tells All The Unknown, it merges from an atmospheric Moraz-like sound to a tremendous beauty for the band to let go and flow. Opening with the balladry turned into ‘80s Neo-Prog sound of the title track, Breathing Space merge the synth of the cult following into the sounds with a heavy guitar sound that adds a pastoral interest.
With its influences and the burst of ‘70s Pomp Rock sound of Starcastle meets Styx, the homage of When I Hold Onto You is just one of the most melodic rock sounds that could have been used in the anime series, Gundam Wing as an opening theme and deals with romance and loss. Yet it’s On The Blue Horizon that is a magnum opus – a ballad that reminisces Genesis’ Afterglow and One for the Vine and comes with a singer-songwriting background that is very emotional.
The uprising structure of Rain Song, works with Iain’s piano work that creates a moody and rainy tone as you can imagine Olivia singing this number in a music video as she is walking by singing and looking into the sky as the rain pours on her as she keeps going while The Senses is very much a driven-number that has a Jazzy rhythm with the bass just pumping and the guitar following the car as it goes into the open road while the Sax gives it that pounding movement as he is on top of the car coming up with some notes as the sun sets in the deserted sky. Don’t Turn a Blind Eye is very much an acoustic folksy sound.
The vocals add melancholic compositions as Olivia and Jennings bring the influential prog sounds on the table to make it very calm and soft. Head Above The Water, brings Olivia into the limelight for another mid-tempo rocker filled with layered guitar work, keyboards reminiscing the Moraz sound that makes it very spacey and most times ambient as the sax closes the number with a soulful tone while the crisp eerie Searching for my Shadow remains very momentum. The splendid finale romantic Turn of the Tide works, you might imagine her wearing a white sparkling gown walking down the stairs without missing a beat as she sings to the audience as she is giving a standing ovation.
This is one of the most uplifting albums that Breathing Space has done since Olivia and Iain are teaming up with Mostly Autumn this year. While it’s very AOR and Floyd-like, it’s well produced to make it a prog favorite of the noughties.
Posted by znathanson at 8:37 PM