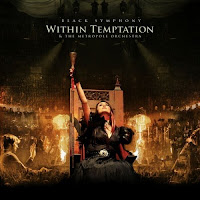 It’s a magnificent characterization of symphonic that a double set such as this, the ambitious concept of a 2CD/2DVD set might fit the profile of Within Temptation’s career. They remain a huge part of the Progressive/Symphonic Metal scene to this day and with the cult status they are receiving in their home land and in the States, they are not slowing down when this came around. The band at the time were promoting their new album, The Heart of Everything and the idea to perform live with the Metropole Orchestra, featuring guest appearances with; Keith Caputo, Anneke Van Giersbergen, and George Oosthoek, along with the Pa’dam choir, is a big leap forward.
The band recorded the entire performance at Ahoy Arena in Rotterdam, Holland on February 7, 2008, this is the holy grail of the band’s music set to a symphony orchestra and realization they bring to the table. It offers almost a Symphonic Broadway Rock Opera to create a beauty by the time they brought the fans the recognition they deserve and how long they came from forming in 1996 to where they are right now in the new wave of Arena Rock. They are more confident with Black Symphony, with Sharon’s dresses which she mentioned that she always wanted to wear them from her inspiration of Fantasy and let’s say she is gorgeous with the dress and the way she sings, however the band are supporting all the way as she gives the audience a performance they’ll never forget.
This is a huge set-list, no drawbacks, no excuses with six enduring numbers. It includes a gorgeous live version of Stand My Ground with Sharon telling the audience to sing the line ‘Stand My Ground/I won’t give in/No more denying I gotta face it/Won’t close my eyes and hide the truth inside.’ Audiences just want to touch the band and Sharon as if they were God-like creatures while the roaring duet of Keith Caputo from Life of Agony is the highlight of the performance giving it all he’s got with What Have You Done. The sinister militant the audiences chanting of The Heart of Everything is glorified with an angry sound as the guitar done by Westerholt makes it very science-fiction and heavier that it can get while drummer Stephen Haestregt’s drums sounds like a machine gun that won’t stop. The lukewarm ballad with piano and orchestra Forgiven gives a warm reception and interestingly, closes with the dramatic goose bumping emotional ballads of All I Need and the hit single Ice Queen.
The 2-DVD set features the full performance including a documentary on the making of the band’s ambitious tour. Now you may have to watch with English Subtitles, but it’s worth watching. It also includes a World Tour footage in which the band have a sense of humor and poke fun at themselves while it has music videos from the four tracks including a making of; Frozen, The Howling, and All I Need.
The extras of course feature the time they won for best international band at the Dutch Pop Award Show along with a performance at the TMF Awards in Benelux and Photo shoot on the band (let’s say their sexy side). This they way the band should bring their sound and vision to a fresh standing ovation. Within Temptation have a long way to go, but they are bringing the 21st century along with them.
Posted by znathanson at 9:44 PM