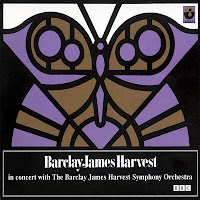 Among the influences of the Melodic and Symphonic Rock scene, Barclay James Harvest always wanted to have their own sound and vision mixing story-telling lyrics with a Symphony Orchestra mixing ballads, folk, science-fiction hard rock, and jazz in a Harvested fashion. And this recording originally performed at Paris Theatre for the BBC on November 16, 1972, you can tell that although BJH would give an emotional farewell to their label, Harvest Records after being dropped by them and moving to a new record label with Polydor, it was a bidding goodbye to their former record label due to taxes by performing concerts with an Orchestra that almost bankrupted them big time. The band at the time were promoting their fourth album, Baby James Harvest, and they knew they wanted to push the envelope more further by making symphonic than ever.
The Paris Theatre, which was originally a small cinema located at Lower Regent Street in London, was a perfect spot to record performances by the BBC for any rock band that was lucky enough to do these sessions, but to do an Orchestra was according to the liner notes very “limited”. The effects made it very difficult of the sound quality for the engineers to record the tapes by proper equilibrium by recording on a multi-track tape. But the BBC decided to instead of the multi-track to use ¼ inch tape instead to make the sound perfect like you would hear this at the Royal Albert Hall live. BJH had to make sure that the tunes were spot on and fit well with the orchestra while rehearsing during the afternoon to get the numbers right and please their fans by doing a history of their catalogue from the self-titled debut album to Baby James Harvest.
BBC In Concert 1972, offers a small set list by performing old material and new material from their fourth album. Starting with an introduction speech by the late former Pirate Radio DJ, Alan Black as he introduces the band to a roar of applause from the audience beginning with the 7-minute jazz-whimsical beauty and the spacey classical rock turned dramatic number (Mocking Bird and Medicine Man). It also includes the ambient folksy gorgeous version that is almost set in an English Country Garden with Galadriel while the 9-minute Acoustic turned chilling guitar layered and moog goose bumping sounds going “WHOOOOSSH!” done by Woolly Wolstenholme and the ghost-like echoing vocals by John Lees gives it a hair-tingling moment on Summer Soldier.
The live version of the gentle and lifting melody of The Poet is very emotional, highly baroque 15th century at the same time, particularly a reminiscent of Leopold Stokowski performing with the Moody Blues in a dramatic form as it segues into the spine-chilling 7-minute epic glory that could have been used in Ben-Hur, After The Day. The 8-minute pastoral Beethoven sound of Moonwater, could have been used interestingly with Disney’s 1940 classic, Fantasia, but it is very spot on and the way that John’s voice is almost angelic to give it that Symphonic feel as the closing 12-minute eerie turned cinematic track, Dark Now My Sky is again goose bumping and very climatic that makes it sinister and at times Floyd-like. It’s not just a great live album, but worth listening to and very much like a Symphonic version of Pink Floyd, well at least you get to see why old school music is good.
Posted by znathanson at 12:08 AM