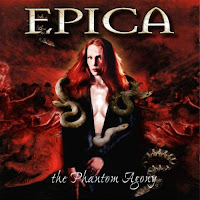 While the Netherlands continues to provide a comfortable area zone for Symphonic Metal for many a veteran band that combines the sound of Beauty and the Beast with creativity operatic cookie monster rock. Epica are here to prove their conceptions with an album that is melodic, orchestral, and blows you away in magnificent moments (Don’t ask me why I just type this down….)
Their debut album in which the band was formed in 2002 while guitarist Mark Jansen left After Forever to pursue a band that would take an crossover of Opera/Symphony/Progressive Metal project that would blow metal heads away by the sound and thanks to the vocal explosions to Simone Simons, The Phantom Agony introduces the band to a swath of Symphonic Progressive Death Metal with an attitude of machine gun drum sounds, guitar’s marching for battle like the political statement against child abuse from the Catholic League with the dooming Cry for the Moon, an emotional song that will appeal to fans of Opeth and Nightwish or any of the Netherland Female Symphonic Metal scene of the noughties. It helps very much, of course with help from a choir that works well along with former drummer Jeroen Simons (no, he and Simone are not related) who has that ancient timing on the drum kit while Isaac Delahaye’s guitar work
has a calmness sound and sometimes chugging like a bullet train to hell while Mark’s rhythm guitar and death grunts sends a chill down your spine. While this is an album is whether you love or loathe, it is very interesting to get into when you hear it twice.
The ballad crisp of Feint in which it was a tribute to political activist Pim Fortuyn who was the center of controversy about Islam by calling it “a backward culture” that makes it feel you are at home as if Epica performed this at his funeral while Illusive Consensus is very much at the time explosive that seemed perfect to perform at Wembley Stadium. At times it sounds as if it’s a medieval metallic version of Queen, but it kicks ass. Façade of Reality (The Embrace that Smothers – Part V), this song not only is a tribute to the 9/11 attacks and features two speeches done by former prime minister, Tony Blair, it is a very heavy song with those modes of what was going during the attacks on that tragic morning. Run For A Fall deals with Mark Jansen’s anger and being pissed off towards his departure of After Forever while Seif Al Din (The Embrace That Smothers, Part VI) which is very middle eastern and the title could be a highlight track in the years of Metal to be an Epic Movie soundtrack ala Gorefest style done by Dario Argento.
The title track which is 8-minutes of a epic battlefield again with the soundtrack that could have been an Oscar Nominated piece for Best Score done to Lord of the Rings, at first it begins with a militant mourning somber sound as it goes into full gear with the Choir-like sound and giving it a real kick in the ass! I must admit this album I’ve really gotten into. Now I must make a confession (so If you read this, my deep apologies to the Death Metal heads) I’m not a fan of the death grunts, but it works well with this album in all of it’s glory. Does it mean I hate Epica? Absolutely not! But it’s worth listening to from start to finish.
Posted by znathanson at 4:11 PM