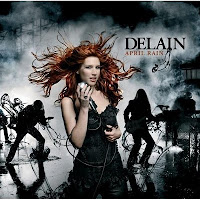 Symphonic Metal may have been the cream of the crop with; Nightwish, Within Temptation, and After Forever since it’s beginnings in the ‘90s but for this upcoming band who formed in 2002 in their hometown of the Netherlands, Delain who are carrying the torch of classical metal, will have full high voltage in dynamic supreme.
April Rain is the 21st century of the band’s full hard rock fantasy charms; Charlotte Wessels angelic vocals, Sander Zoer’s drums are pounding like a machine gun that won’t stop, Martijn Weterholt’s keyboard adds the tension throughout each track, Ronald Landa’s guitar work is electrifying while bassist Rob Van Der Loo is bringing Delain’s music to a glorified skill that veers between a masterpiece and retro on your asses. If Symphonic Metal is growing stronger than ever of the Progressive Death Metal sound with Opeth, then April Rain is the kid brother/sister of Symphonic Power Death Metal: It’s the band at their best with orchestral, piano-crisp, Celtic, and yes, operatic from Charlotte’s voice. Not that she’s trying to rip off former singer of Nightwish, Tarja, but to pay tribute to the queen of metal and Sharon Den Adel of WT, here you get the full treatment of a Metallic sonic-sounding force.
It kicks off with the big explosive titled track that will blow you away, but it has sort of the early power rock sound of the ‘90s (imagine if you will that Charlotte is singing this in a Gothic Cathedral with the line; ‘How does it feel when all you’re counting on is scatterbrain/Every wind that you have sailed upon a hurricane/every summer you have seen was filled with April Rain/It doesn’t get easy don’t you know’ she is really spot on with the nervous breakdown boundaries of the song) Then everything becomes very strong with the duet between Marco Hietala who is sort of the Netherland’s answer to Bruce Dickinson with the Iron Maiden-esque, Control The Storm. But what the hell, I really enjoy the track.
An homage to Opeth and the Death Metal scene gets some recognition with the pseudo-viola haunting beauty of Virtue and Vice, has the album back on it’s knees before we go into the speed metal bat out of hell race track with Go Away as it dives back into the ocean of the Soft side of Delain’s background. Start Swimming is very Alternative Celtic Folk, a 4-minute calmness that sounds like something Steve Harris’ daughter, Lauren Harris would’ve have created a beauty with this if she had toured with them rather than being at a gigantic stadium opening for his father. Again with the pounding beats, Lost references running away from a loved one who has a dark secret to reveal your secret side; I’ll Reach You which sounds like Magenta’s Christina Booth meets the metallic version of the Fish-era of Marillion’s Misplaced Childhood being a perfect match made in Heaven.
Closing track, Nothing Left, is very power pop again with the duet between Charlotte Wessels and Marco Hietala as if they were trying to go for the Judas Priest softer side sound along with Maiden’s dynamic power metal technique.April Rain is the most underrated album Delain ever made. It’s interesting and perfectly heart-stopping majestic.
Posted by znathanson at 4:45 PM