Pythia - Beneath The Velied Embrace 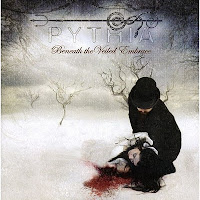 This could be the most unbelievable debut albums that you are about to embark on for the futuristic ride you are about to explore. Pythia merge Symphonic Power Goth Metal and emotional lyrics in ways that Nightwish could have thought of. Most of the times it sounds like Dream Theater had replaced James LaBrie with a female singer who had an operatic and musical background but with attitude sounding like Epica at times. But sometimes, it’s more of the elements of Metallica and Redemption about this new group who are from London, England. At others, there’s the Deep Purple, Ritchie Blackmore’s Rainbow, and the Iron Maiden edge about Pythia.
From the blistering opening militant rocker sounds of Sweet Cantation and Sarah (Bury Her), to the homage of Symphonic alternate sounds of the New Wave of British Heavy Metal sounds of Judas Priest as if they were formed in the 17th century with Tristian and Ride For Glory, the six-piece really have balls of steel and how Symphonic Metal is supposed to be sound with this, not to mention the cover of the death of a loss one in a pool of blood which is very ‘eavy and very ‘umble. The mix of the crossover takes these two pieces of music up the mountains to climatic mountains that you’ll never expect to hear from start to finish.
But the album isn’t just a simple Heavy Metal album and singing about emotional lyrics and betrayal; there’s more for this English band who formed in 2007. Take for a perfect example of their love of Fantasy and a haunting version that would have make Tolkien scared shitless over: The haunting speeding tempo of My Pale Prince, is embellished by a sublime Kirk Hammett solo and James Hetfield rhythm chugging done by Ross White and Tim Neale while vocalist Emily Alice Ovenden brings the song to a dark table with an edgier Within Temptation sound which is Pythia’s game plan to conquer the Symphonic Metal world. Eternal Darkness is another haunting track, but it has a sentimental, army drum sound done by Marc Dyos and keyboardist Richard Holland does some harpsichord work on the keyboards to set the mood of the song. It really helps a great deal because of what Emily does who has an operatic rock vocal sound similar to Sharon Den Adel and Tarjla Turunen with the band gelling together to give that kick in the gut treatment.
The layered and fast tempo flows of What You Wish For and Oedipus really sucks you in as if you are in the band’s mind while they are recording these songs for a darker version of a love-triangle story from Bram Stoker’s Dracula and a revamped version of Jean Cocteau’s Beauty and the Beast. Army of the Damned which features at the end of an outro narration done by Yorkshire actor, Brian Blessed, best known for his booming voice and king-sized work, is a tribute to an unknown NWOBHM band called Legend meets the Dio-era sound of Rainbow Rising and its formulaic and dynamic while No Compromise is closing magnetic track that relies on Heaven & Hell. All in all, Beneath the Veiled Embrace is a magnificent debut album that can be up the top ten list of Symphonic Metal albums in any fan’s wish list.
Posted by znathanson at 6:05 PM

Great review! I've been a fan of Pythia since i saw their very first gig in London in December 2007. Since then i've followed the band as well as helping them out with things occasionally and i'm really excited about their future.

They are starting to get wider recognition around the world and this album gets it's Japanese release next week. Also a second album should be out later in the year. Exciting times!

You're welcome. I can't wait to hear the second album. Pythia are one of the most up-and-coming symphonic metal bands to come out of the 2000s.