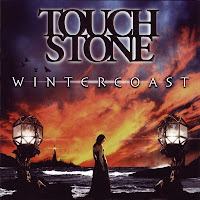 With their follow up to Discordant Dreams, the five-piece Hertfordshire band may have delivered the 2007 release like a bullet train that won’t stop. And being acknowledge from Classic Rock Magazine’s writers Dave Ling and Geoff Barton along with musicians including Rick Wakeman and Jeff Wayne, they are never going to stop any time now. Now with Wintercoast, which was released last year, they may have gotten something here to deliver a big surprise among the Progressive Rock fans. And adding a prelude narration done by award-winning actor, Jeremy Irons who’s best known for his work on David Cronenberg’s Dead Fingers, The Lion King, M. Butterfly, and Reversal of Fortune, Touchstone are thinking big by going Arena Rock style. Loud symphonic rock, lukewarm melodies, shattering guitar riffs, and flourishing keyboard sounds, Touchstone’s music gives you a real kick in the gut by the time you listen to Wintercoast.
Following in the footsteps of Female Prog queens and the new bands like; The Gathering, Mostly Autumn, Within Temptation, Nightwish, and the old school sound of Progressive Rock Female queens, this album is defintely worth the wait to be on the magic carpet ride of the new wave of Progressive Rock for the 21st century.
It may sound cheesy for me to say this, but female singer Kim Seviour defintely brings the house down on her vocal arrangements and there is her retrospective childhood momentums that seemed very touching and has the listener grab her attention. Tracks like; Joker in the Park, the hard rock almost-hit-single of Strange Days, Voices, and the 10-minute title track which is very Symphony X meets Rush’s Snakes & Arrows-era sound ala Celtic Style. Kim and guitarist Adam Hodgson make a great team along with keyboardist and founding member of Touchstone, keyboardist Rob Cottingham bring the pieces of the band’s music on the table and finding out which piece goes where and how the time changes would work on the compostion’s. The lyrics here are magnificent – I always imagine how this band would hit the Stadiums like Wembley Arena, Toyota Center, and offering Touchstone to give to that top notch. On the album’s temperature process, it really feels that the band that really can bring the musicianship up a level to an underground scene like nother. Alongside the four tracks that are mentioned here on this album, there are three highlights that really grab my attention.
Original Sin, a very haunting number with the help of Rob’s keyboard solo which is similar to Patrick Moraz and the Tales From Topographic Oceans-era sound to make it a wonderful power prog metal ballad (probably the first time they ever done this in this style) as Seviour soars through the heavenly sky while Adam does some guitar work that is very Van Halen meets Alex Lifeson sound. Zinomorph which is a killing number featuring a jazz fusion bass work done by Andre Moorghen, it has a mind-boggling hard rock riff that makes the song very fantasy-like while the two-part epic, The Witness represents Touchstone’s sound of a tribute to Pink Floyd and Marillion as it becomes a battling to the death number with phases and a time signature that is up your alley. Touchstone may have a long way to go, but Wintercoast is the elaborate rock opera album.
Posted by znathanson at 10:25 AM