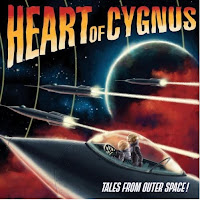 Centered around their love of Flash Gordon, Sci-Fi comic books, the original Star Wars trilogy and admiring the love of Rush, early Queen, and Iron Maiden, Heart of Cygnus have acclaimed in the underground metal community and myself included praised this band to be the progressive metal band to come out of the Los Angeles area as a the bands I’ve mentioned in the introduction. In fact, their first album Utopia is defintely their dramatic masterpiece. However the most important part, Heart of Cygnus which is named after a line on the track of Rush’s classic epic Cygnus X-1, they have achieved story-telling metal music rather than showing off, they are the followers of Progressive Metal for the 21st century.
Fortunately on their third album, Tales From Outer Space, the band have made usage of the Rock Musical format of the mind from Freddie Mercury as they leap forward to overcome fresh new challenges that defintely awaits for them. While their first two albums have been layered with a lot of shredding guitar sounds and epic tolkien-related song scriptures, they boldly go where no metalhead has gone before in the planet solar system’s and beyond the inifinte where the listener goes on a spaceship with Heart of Cygnus. Which, surprisingly gives the concept album a more depth storyline – a big surprise that awaits the fans to see what they’ll come up with.
This is unbelivably, symphonic metal, classical orchestral homage to Brian May’s guitar sound that gives it the Queen treatment as if it was a speed metallic sound, best known example is In The Days of the Galacitc Alliance, a number that is out of this world with a song that deals with leaving their home planet after being forced to leave by the Alliance which is very similar to an episode of the Transformers or the cult-classic steroid hero, He-Man and the Masters of the Universe. Guitarist,Keyboardist, and vocalist Jeff Lane, drummer Jim Nahikian,
and newcomer guitar player Aldo Galatioto, their performing is very virtuoso and very humble to their heroes of the metallic sound of the ‘70s and early ‘80s mixing New Wave of British Heavy Metal meets Prog Rock in all of its glory not to mention the keyboard ambient folk glory of Starship Troopers, which has an atmospheric glorified beauty that sends goose bumps all over your body thinking these guys are not screwing around. Not to mention the three-part epics that makes your blood pumping.
On Space Trilogy, Jeff Lane sounds unbelivably like an american version Bruce Dickinson as he narrates the battle of fighting for freedom as the band become the space rock opera sound proving themselves there are no strangers with heavy guitar licks and eerie synths that are similar to the ‘50s B-Movies that are set in outer space while on the third part they are chugging to the cores of hell and then becoming more of the atmospheric sounds similar almost to early Tangerine Dream’s Electronic Meditation and then becoming into the Nektar sounds of a Tab in the Ocean metal style. The result is a disturbing rocking adventure as the whole piece affairs to a magnificent climax that is one hell of a track to listen. Heart of Cygnus are still getting there, buy the three albums and you’ll see how good they really are.
Posted by znathanson at 10:35 AM