Second Hand - Death May Be Your Santa Claus 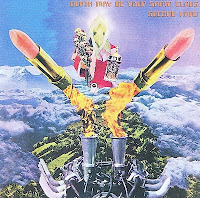 “Understand, Love If You Can/It May Be Your Santa Claus” Ah, yes, the political lyrics of the late ‘60s band whose music was completely ahead of their time and expect to either be scared shitless or be taken away by the lyrics that make it very strange poetic beauty that seemed to be perfect to win the Pulitzer Prize award for best writing of 1971.
The second and final album from the late ‘60s/early ‘70s, which was originally recorded for a soundtrack to an independent short film which appeared at the Edinburgh Film Festival in 1969, but suddenly disappeared. However, this band who formed in the late ‘60s in the South of London at the time influenced by Creation, The Who, and the Small Faces, Second Hand’s Death May Be Your Santa Claus is a lost classic prog/psych collection from a band whose musicianship still sounds weird, bizarre, and most of the time interesting to listen to. Today, it still sounds outstanding around the time the album was ahead of its time in 1971.
From the kind of Psychedelic rock sound, you’d be hearing with the whirling keyboard introduction opener of the first part of the title track, through the magnetic mellotron fantasy of Hangin’ On an Eyelid while they go through a Fugue of the 7-minute track, Lucifer and the Egg, to the Krautrock orientation of Can meets The Soft Machine meets Osibisa fuzz tone boogie of African Tribal drumming section of Somethin’ You Got, they go for the haunting dooming prog sound for a mourning of a best friend with the eerie 6-minute avant-garde epic, classical treatment of Cyclops. Death May Be Your Santa Claus may not be for the fainted heart, sure it may sound a little disorientated, but the more adventures and styles the band may find very fond of to hear this from start to finish. The CD which was reissued by the people at Sunbeam Records, features liner notes by Richard Morton Jack and interviews with Ken Elliot, Vic Keary about the making of their swansong masterpiece before becoming the Sci-Fi band, Seventh Wave.
Throughout the 9 tracks including the monk-disturbance of Sic Transit Gloria Mundi with the Moog going apeshit and then with an explosion that is very post-apocalyptic as it segues into the bible of Revelations Ch. 16 vs. 9-21 with it’s haywire sound of the keyboards going crazy of the overtones of The Faust Tapes and the Beatles avant-garde trip of Revolution 9 then becoming a dooming glorified beauty that is very ear-bleeding while Take To The Skies becomes an electronic rollercoaster ride with its synthesizers and mellotron’s carrying the flag of the early heyday of Tangerine Dream’s pre-Phaedra sound. While the last track is the second part of the reprising title track with a slow beat and then carrying the space signal or the heavens to give a calming reaction and then a sinister wake-up call, the three bonus tracks are the beginning of the end for Second Hand. Funeral is very much an homage to The Who as if they were a classical rock band while Dip It Out of the Bog Fred is ragtime western avant-garde madness as for Baby RU Anudder Monster? Let’s say their having a quirky sense of humor of the ‘50s rock sound ala Captain Beefheart-style. This band were way ahead of their time, they deserve a second chance with a helping hand.
Posted by znathanson at 8:33 AM