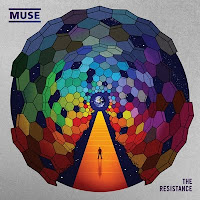 From their follow up of Black Holes & Revelations released in 2006, Muse pull no punches as for their next album which is released this year, you began to wonder when they were listening to this album, imagining them listening to neo-classical albums from the minds of Camel, Radiohead, Mike Oldfield, and Pink Floyd’s Atom Heart Mother, then listening to Chopin while coming up with some incredible compositions, then you get the political backgrounds to began to realize that they aren’t joking for this English trio on what they’re doing and heading for a new direction.
This is an incredible experience that features incredible sonic disturbances, and mostly, heavy atmospheric dance beats (Resistance I Belong To You, MK Ultra, and Uprising) but it creates a dynamic emotional techno rock sound with a Krautrock background of the 17th century with ultimate power and '80s new wave (Undisclosed Desires, Unatural Selection, and Guiding Light). The quality of such a musical background that the homage to the ‘70s standards and the moments of more tributes of Chopin meets Brian May seems the perfect time at the right place to create such a beautiful romantical battle with a tragic Shakespearian ending. The momentum of the tribute of Queen’s second album with the ballad turned climatic ending of United States of Eurasia/Collateral Damage is perhaps one of the most powerful songs and an example of Muse’s career and probably a hit for 5-minutes that is reminded me of Bohemian Rhapsody and the Ogre Battle operatic suite. And then comes the new sound of Neo-Classical Rock with Exogenesis, a 12-minute symphonic classical prog to the core that is dark, sad, and also a masterpiece with its homage to the Floyd meets Wagner. The first part begins with the end of human race while part two deals with new life form searching for a new beginning and the finale of part three how the surviving humans can change a new beginning. This is prog as it could get right there.
Their new album, The Resistance should be played really fucking loud by the time you buy this either at a record store or on iTunes. Anything that would make you ultimately surprised by the time when you listen to this from beginning to end, it’s a very surprising record to listen to the way that Matt Bellamy just brings that Thom Yorke meets Freddie Mercury vocals to the core while shattering mind-boggling notes on his guitar to give it that Prog meets garage rock sound to pay tribute to his father George Bellamy of the Tornados which he does it very well. Chris Wolstenholme on the bass gets the music spot on while drummer Dominic Howard does a cross between Roger Taylor meets Neil Peart meets Bill Bruford on the drums to make you have goosebumps all over again like it’s the 20th century all over again.
Also, The Resistance has taken Muse into the mainstream when they played the MTV Video Music Awards this year which is a good thing for them because they will have to face up with new challenges, darker territory including recording a new song for the Twilight sequel, New Moon, but enough of my bullshit. Some fans may criticize them for selling out because of doing a soundtrack for a godforsaken chick flick gothic vampire film which goes back when Supermassive Black Hole was on there in the first one. But enough of my bullshit rant about Twilight, Muse have finally hit the big time. So what they did is almost make a sequel to their past three albums (Origin of Symmetry, Absolution, and Black Holes) and realize their situation and to have their fans go apeshit over them.
When the Neo-Prog scene is still going strong around the world and having new bands coming out of England and the United States also, Muse have started out as a club band into international prog superstars to set the controls for the heart of the sun of classical rock and setting new musical elements and upcoming stories that lay ahead for them. This is for me, the next Dark Side of the Moon meets A Night at the Opera meets OK Computer right here.
Posted by znathanson at 9:21 PM