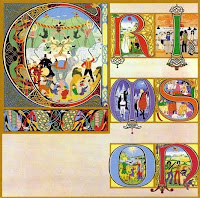 After three of the original members left King Crimson (Greg Lake, Michael Giles, and Ian McDonald) to pursue new careers, it was up to Robert Fripp to make King Crimson sinister like no other as he pays homage to Miles Davis two fusion albums In a Silent Way and Bitches Brew. Bassist Gordon Haskell who was interviewed in 2005 for the MOJO prog rock edition, and was the vocalist on Cadence and Cascade for In the Wake of Poseidon, saw Crimson in a totally new direction “I saw Crimson as an evil force” he mentions, “They were very powerful, like Satan is powerful.” And in the words of the Melody Maker “If Wagner were alive, he would be in King Crimson”, well this time, he definitely was.
Lizard which was released in 1970, saw them going into a Jazz Rock/Fusion area, it was also controversial which created a diversion among their fans and music critics alike mentioning that it’s a difficult and weaker album. It isn’t, Lizard is the cult album for Crimson fans to sink their teeth into. Adding new members including saxophonist Mel Collins and drummer Andy McCulloch to the line-up and also special guest lead vocalist of Yes, Jon Anderson, It’s very Avant-Garde, Classical, Post-Apocalyptic, Climatic, and a lot of humor to the mix as if they had recorded this album in a church yard to wake up the guests to hear this magnificent opus from start to finish or recorded it at Bald Mountain to wake Chernabog up to call his ghosts and evil spirits coming to life and hearing this band go full throttle depending how to scare the shit out of listeners; the 6-minute opener, Cirkus (Introducing Lady of the Chameleons), begins with an electric piano as Haskell sings beautifully as such. Then all of a sudden, it becomes a shrieking tone from the mellotron and the bass/VCS3 composition before closing it up to a dynamic of free form jazz sax solo done by Mr. Collins that would have made John Coltrane very proud of as he was moving toward territorial musical riffs.
And then it becomes very quirky at the same time during the record. Indoor Games is very pop, beatle jazz-related rhythms as Mel brings the house down as he plays the sax non stop while Happy Family becomes very disturbing and creates massive chaos throughout the entire number, but the upbeat ditty is sweet and fantastic while it makes it very interesting to hear with its odd time signature as it goes flying in the nightless sky. The lukewarm ballad Lady of the Dancing Water, is a quiet and whimsical beauty as we head toward the closing chaotic and ominous 23-minute suite of the title track.
Jon Anderson of Yes makes a surprise appearance on the album as he sings about the fate of Prince Rupert’s life as he sings with a lot of melody pleasing and in an harmonic tone of setting the scenery that is similar to Lord of the Rings and the 15th century tales that King Crimson was reading during that time period. Then it becomes a militant jazz fusion with their take of Ravel’s Bolero then gets it stops with a haunting oboe solo as Haskell sings about the war on The Battle of Glass Tears as it becomes very classical in a darker sense of the word, hell at the same time. After he sings the last two lines: “March Forward”, KABOOM! The band comes in as they bring the thunder down of as Crimson plays Hard Rock meets demonic Jazz meets dalek sounds of the mellotron as if Edgar Allen Poe was playing with them. And then, the dooming bass note and Fripp’s cruel guitar solo sets the bloody aftermath while the finale is weird with a Carnival background of the Mellotron with Big Top. Sure, Lizard is a strange and twisted album to feature some Jazz-classic prog rock to the core, but its one hell of an album to listen to.
Posted by znathanson at 10:46 PM