Pink Floyd - The Piper at the Gates of Dawn 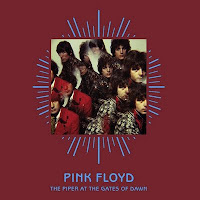 Named after the seventh chapter from The Wind in the Willows which was the late great Syd Barrett’s favorite book in his childhood years in Cambridge, their psychedelic debut album blew down the door down as it was following into the footsteps of The Beatles Sgt. Pepper album. The Piper at the Gates of Dawn was one of the most exciting albums to come out of that era as it became British boom in the underground circuit. Although it’s up there along with their sonic sound landmark with Dark Side of the Moon, 42 minutes and 11 seconds of unbelievable tour de force, the Syd Barrett-era of Pink Floyd became the anti-punks of the generation, but it’s a big step of shattering rock pieces and almost fairy tale-like stories of insanity from Syd’s vision.
Beginning with the early days of Space Rock with the freak-out psychedelic 4-minute introduction with Astronomy Domine, it has a huge calling to the solar systems between Jupiter and Saturn as if they were dancing along to the music as they duel it out with Neptune and Titan with the stars that have been frightening that starts off Syd’s echoing guitar solo in the midsection as he just goes off into the outer limits while he and Rick Wright take the vocal arrangements up a notch of the LSD trip in this. Strange lyrics are also a part of Syd’s background with the dance rocker featuring Rick’s eerie organ solo of a Siamese cat who some can’t explain who he is and who is on your side by the name of Lucifer Sam while Matilda Mother is almost similar to Lewis Carroll’s Alice in Wonderland and has a very English countryside background in this fantasy rocker that is similar Jefferson Airplane’s Surrealistic Pillow. As Flaming reminded me of the Milton Bradley game Chutes and Ladders with its game that would have children try to play in the English courtyard.
Even though The Piper at the Gates of Dawn is one of the quintessential masterpieces in Pink Floyd’s career, it’s very strange also. The beginning of ‘bah-boom, ch-ch’, the hawking sounds done by Roger Waters and the jungle-esque quality to the mix in this Jazz and Experimental Rock orientations in the Vietnam War, Pow R. Toch H. is bizarre in a good way along with the upbeat fast-sped garage rocker of Roger Waters debut as a songwriter in Take Up Thy Stethoscope and Walk. In this number, the Floyd are going guitar and keyboard crazy throughout the entire tune as if they are the Mad Scientists flying off the fucking wall as it features a sinister climax that will have you in goosebumps. And then we get into the Freak-Out which was almost a fan favorite at Joe Boyd, who produced the Floyd’s debut single Arnold Layne, UFO club, with the 9-minute psychedelic groove of Interstellar Overdrive. Featuring a distorted riff done by Syd and Roger, along with Nick Mason’s drumming making it sound very surprising and Rick Wright’s farisfa organ setting the scenery it becomes a free-for-all instrumental while they show their Tolkien homage in a Whimsical Folk beverage of childhood stories about the adventures of Grimble Gromble in the Gnome.
And then it becomes very interesting for Syd before his mental breakdown with his homage of the ancient Chinese tome of the I Ching (The Book of Changes) with Chapter 24 as it has a spooky tone done by Rick as Syd explains about the translation of the six stages of the 24th chapter in this funeralistic story. The Scarecrow tells the tale about the figure as he decides what to do with his life while Bike closes the album with the dark comedy that would come about. While there’s a taste of grandeur, the album feels magical, you feel that you are inside the mind of Syd Barrett.
Posted by znathanson at 9:55 PM