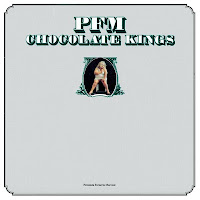 If Great Britain had been home to the kings of progressive rock with using the styles of classical, jazz, and story-complexes, then no one could top it off quite explosively with Italian’s own answer to Genesis as Premiata Forneria Marconi (PFM). With their five albums ahead of them, Storia Di Un Minuto, Per Un Amico, Photos of Ghosts, L’isola di niente, and The World Became the World, the group began to push forward into the mainstream after achieving a cult following along with being signed by the Manticore label, which was founded by ELP, their fifth album went into a twisted odd-like story between the cross-over’s of Family, Gentle Giant, PG-era of Genesis, and heavy signatures to search for the lost chord. But here, with Chocolate Kings, the five-piece quickly began to stay in focus.
The toughest opener From Under could have been written in the baroque-era of the symphonic sounds for a concerto with a complex harmony. When I heard it, it almost reminded me of the opening track of Gentle Giant’s The Runaway, but it’s a hell of a track that will blow your socks off and it works 100%. Also, the arrival of Acqua Fragile’s lead singer Bernardo Lanzetti, was a huge help. His voice, who grew up listening to the British bands, the vocal almost similar to Roger Chapman and Peter Gabriel, shown on the balladry of the title-track, he brings it to the table while the rest of the band bring some layered compositions to the core.
The other four members of PFM started to go a little Fusion, replacement for bassist Giorgio Piazza, Jan Patrick Djivas’ heavy, walking bass lines, keyboardist Flavio Premoli, violinist Mauro Pagani, and Franz Di Cioccio’s own take of Carl Palmer on the drums bring the music to the table with the Jazz Fusion homage of The Mahavishnu Orchestra with Out on the Roundabout and From Under. The arranging and composition on here, really has a lot of virtuoso playing that the band do since their earlier days, with Flavio Premoli’s machine hammer sound on the keyboards on the opener, he keeps the jets flying like militant troops going to war.
Alongside other Italian Prog Rock bands, that admired the British Prog Rockers, Premiata Forneria Marconi took their music and theory seriously as if they were composers in their own rights. As Paper Charms sounded like a mystery film score with the organ, then turning into an ambient mood with Bernard’s choir-like voice and then adding the synthesizer and flute to the core before becoming a dynamic symphonic heavy upbeats. Again, the title track is a tight number but very groovy with its melodic rocking tour de force. With the tones that Bernard’s voice keeps it soaring – even though it sounds as if a goat has got a new singing voice, but that doesn’t matter – got the band to move forward that would divide their fans from their later albums until calling it a day in the late ‘80s. Even though they’re came back in 1997 and with new albums, it just goes to show you how important that PFM are and why they are not backing down after getting the recognition they deserve with the Prog festivals they’re doing including NEARfest of this year at Pennsylvania during the Summer of 2009 which I think got the crowd pleased with the sound they have to this today.
Sure, Chocolate Kings may have been either loved or loathed by their fans, by going forward into a new direction, but after listening to this album for about two times already, you can tell the Jazz influential sounds of what they were listening to, Eclectic, sometimes Bombastic, and very ELP like, its might as well be the next Passion Play.
Posted by znathanson at 7:52 PM