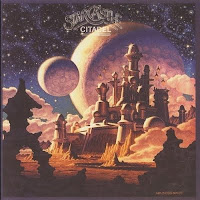 When I first heard about this band, I thought “let me give this band a few listens to”. It wasn’t until I bought two of their albums, the self-titled debut album and their third album released after Fountains of Light, Citadel which was released on the Epic label in 1977. When I’ve first heard Citadel, I began to think about if Yes was formed in St. Louis Missouri and created a magical cornerstone and very accessible that this band who were formed at the end of the late ‘60s, it would have been Starcastle. I was convinced that this band who then and now have a cult following in the Prog festivals internationally and here in the United States, they never plan to fall back.
I began to realize to stick with the flaming matches and kept them flaming, to realize that Citadel, is not only just an American Progressive Rock album, but a lost classic and one of those albums that you play after listening to Fragile that began to come up and give you a surprise moment, then all of a sudden get your attention in a dare I say the return of the Pomp Rock sound and refusing to let go of the rope of the genre.
Starcastle who then were doing small gigs and at universities, as for being the band for supporting for other orientated rockers that were dominating the charts like; Journey, Styx, REO Speedwagon, and Kansas to name a few, but Starcastle wasn’t a part of the single charts after their song, ‘Diamond Song (Deep is the Light) tried, but failed to make in the top chart. Even though their second album, Fountains of Light, which was produced by Queen’s Roy Thomas Baker, they want to push their third album, Citadel, a step further. And this here, you need to buy big time! Alongside the band, bassist Gary Strater’s playing on the bass reminded me of Chris Squire while Terry Luttrell could have been a stepbrother of Jon Anderson as Herb Schildt’s keyboard playing soars up the sky as he comes up with some odd atmospheric, ambient and flourishing sounds like Rick Wakeman and Keith Emerson. Stephen Tassler plays the drums very good almost reminding me of Bill Bruford meets Carl Palmer meets Billy Cobham and the guitarist coming up with a virtuoso solos, features the band as a Tolkien-esque storytellers, as they work as a team.
There are five centerpieces that took me by surprise: The ELP meets Jon Anderson tribute with the prog-orientated rocker, Why Have They Gone? And then, the complex and the superfluous opener that could have been a song that almost could have been a part of the Robotech: The Macross Saga soundtrack, Shine On Brightly that sounds like a dreamlike opener from the moment you hear it from beginning to end with the keyboards and the guitar rhythm and solos soaring across the sky as Terry brings the house down with his voice. Also, you have the homage to Styx’s Wooden Nickel recording-era of the early ‘70s as they do a power-prog pop rock sound of Can’t Think Twice which sounds very love song-like, but it’s a killing track along with the upbeat rocker of Could This Be Love? In it, the guitar is taking over doing some Hackett related solos along with Steve Howe to the mix to live in the Paradise of beauty. And, Evening Wind is very much similar to German’s answer to ELP with Triumvirat, it again has a complex and a structure to it. But it really fits the key of Starcastle’s career.
For the new people, who are getting into the Progressive Rock genre, if you love Yes, Kansas, and ELP to name a few, you have to get into the music of Starcastle and appreciate them, not as a band, but as one of the cult favorites amongst the Prog Rock community and get into Citadel and highly recommend it. It’s a lost masterpiece in a good way!
Posted by znathanson at 12:22 PM