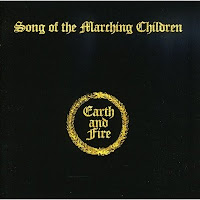 For most bands, they want to be considered the next Renaissance featuring Annie Haslam due to the vocal styles of Jereny Kaagman, Earth & Fire were one of the bands that had a symphonic sound than being considered to be a Dutch version of Yes to be in the court of progressive rock. But for their second album, which was their follow up to their self-titled debut album, is pre-album orientated rock while blending an 18-minute epic with the sounds of futuristic music and a taste of eerie noises of shattering progressive madness.
Formed in the Netherlands of The Hague in the late ‘60s by brothers Chris and Gerard Koerts, they began to move their sound into something that was spectacular. Alongside the Koerts brothers, there was drummer Kees Kalis and bassist Hans Ziech. And then Manuela Berloth who was a part of the line-up called Opus Gainfull, left and soon Jerney came in the line-up and thus Earth & Fire was born. She may have sounded similar to Jo Meek and Sonja Kristina, but it worked perfectly and Song of the Marching Children, which was a concept album about being born, life, and death that brought the band to a small standstill.
But, what may have a surprise twist with the reissue from the Esoteric label, shows that Earth & Fire were starting in their early days and a small motorway for Kaagman. In fact, drummer Kees Kalis and keyboardist Gerard Koerts, bassist Ziech hold the album on their minds. The opener Carnival of the Animals, a tribute to French composer Camille Saint- Saens (yes, a tribute to the classical composer) starts off with the drums doing a militant and catchy upbeat while the organ doing a merry-go-round sound and Kaagman’s vocals bringing it up a notch while Ebbtide is another catchy melody with a jazzy flute solo that has the rhythm flowing while the guitar comes up with some spooky chords as the organ flourishes. The sinister 6-minute ballad Storm & Thunder, manages to be quite dramatic without making excuses into going a world of madness. In the beginning and in the mid section, Gerard plays this eerie organ introduction to set the tone for Jereny to come in. But in the mid part he and Kaagman brings lighting for the last 2-minutes with the mellotron and Gerard coming with some Robert Fripp style on the guitar as they create magic in this powerful number. In The Mountains is an instrumental composition without the vocal arrangements. The number always reminded me of Pink Floyd’s extended guitar solo of Fat Old Sun as Chris’s guitar licks sounds similar to David Gilmour’s technique. And then, we come to the finale of the 18-minute suite, Song of the Marching Children.
The suite is about a new beginning on our home planet as Theme of the Marching Children is very ambient for the first two-minutes with guitar, organ, and xylophone and then on Opening the Seal featuring the luxurious mellotron setting the number as the Harpsichord comes in with its classical touch while Childhood becomes a hard rocker then going back to the symphonic beauty. Affliction is a dark moody atmospheric early space rock sound with the synth and guitar filling the void as Damnation makes it sound very post-apocalyptic and the start of renewal with the mellotron. It then becomes a happy-go-lucky number and then turns to a magnificent beauty. Purification is a classical number featuring the acoustic guitar giving the calmness during the section while Jereny comes in on this symphonic piece with how the crack of doom can happen again while the Marching is packed with a sinister ending with the drums doing a militant outro that closes the album. All of the concept, it’s an unheard masterpiece to get into.
Posted by znathanson at 8:26 PM