Renaissance - Turn of the Cards 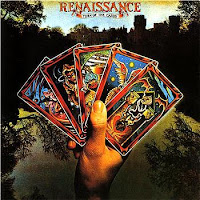 With a surprising sound from lead vocalist Annie Haslam and featuring lyrics by Betty Thatcher who created a lushful scenery to fit Renaissance’s musical background, their next album which was a follow up to Ashes Are Burning and moving to a new record label from Sovereign to BTM, it goes to show how Renaissance’s music doesn’t stop. That and their follow up to Ashes, has written symphonic progressive and art rock written all over it.
There are classical references, which are cool, but Renaissance’s Turn of the Cards; it had more of a division and capacitally more balladry to their roots. Again, Annie’s vocal arrangements, who are more of a narrator, operatic sounds come across to the Scandinavian sounds of Earth & Fire. And bassist John Camp whose bass sounds leaning of the minds of Chris Squire has come across the prog background to the apple tree of good fortune.
The reaction of the album is a nonstop masterpiece as their arranging and composition as they began to show their music has complex in only six tracks while having a 15th century lukewarm beauty and the opus with the orchestral background as they began to move forward. Beginning with Running Hard, that has a Gershwin piano introduction similar to Rhapsody in Blue as it moves into an upbeat sound while the band and the symphony comes in into a heart-pounding magnetism performance quality. Then, they show the tribute to the British Folk in a romantic acoustic crisp in I Think of You while Things I Don’t Understand has a dance rhythm along with the band’s harmonic vocals. It has a jazz related sound, but it’s spot on while Cold is Being has a church like quality with the organ giving this Floyd-like sound on Celestial Voices based on classical proportions.
Then we get to Black Flame which goes back into the Folk sound while John Camp is doing a Chris Squire relative sound on his Bass guitar as it goes through various changes to give it a symphonic sound that is similar to the Moody Blues Days of Future Passed meets The Yes Album in a minimal number. And then, we get to the finale which has been considered one of Renaissance’s quantum leap with their nine-minute classic of Mother Russia. The piece is dedicated to the late Alexander Solzhesnitsyn, who passed away last year of a heart failure, was forced to leave the Soviet Union from the communist in 1974 and based on his book One Day in the Life of Ivan Denisovich which was set in the ‘50s at a labor camp about the horror of the Soviets.
With a mesmerizing tone, Mother Russia begins with a mournful piano ballad then becomes of a scene straight from the dramatic tales of what was going on during that political background of Russia and then it becomes a crescendo while Annie comes in with the opening lines “Pays the price, works the seasons through/Frozen days, he thinks of you/Cold as ice but he burns for you/Mother Russia, cant you hear him too?” As Haslam brings her voice of Alex’s life story, the guitar and the strings bring to a standstill. During the last 5-minutes of Mother Russia, it becomes a suite almost of the instrumental with a beautiful improvisation done by the band and Annie’s vocals that are very choir and gives you goosebumps as she sings the last few lines to close the album.
Turn of the Cards along with Prologue, Ashes Are Burning, and Scheherazade shows the band at their very best and bringing them to a globalization of their fans and their plans to bring the efforts at a high temperature.
Posted by znathanson at 10:14 PM