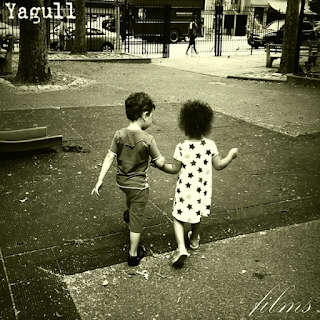 Touches of Acid Folk, Flamenco, and Classical Guitar work are evidential in the mind of Sasha Markovic and his group Yagull that were inspired by the three genres including Jazz as the inspirations come to mind of Miles Davis, Comus, Tudor Lodge, Ottmar Liebert, and Trees that makes perfect sense. And the album, Films is a somber yet beautiful guitar-layered instrumental album that is a dark, haunting, beautiful yet structured piece of compositions including two covers by Cream and Black Sabbath, takes the sound into various locations that you haven’t seen before.

With its acoustic crisp guitar sound, and with a cover of two children holding hands in the park to go and play in a black-and-white scenery, Films is more of a love-letter to the music Sasha adored growing up and the tracks come at you and will be taken aback from the way he writes and understands about the love of how his guitar and the music isn’t dead, but taking the listener to open their eyes and understanding the nature of Markovic himself. Summerdreamer has this wonderful gentle homage to Barclay James Harvest’s Mockingbird as if Sasha wrote this as a sequel to where the pastoral composition left off as he’s playing both the rhythm and the fingerpicking touches on the guitar and making it sound like a warm and lovely day in the summer.

Pulse is a mourning and emotional yet touching piece as Markovic and flautist Lori Reddy comes up with these folk-like tearful sounds on her flute to set up the atmosphere while the flamenco comes in full strength of Cream’s White Room and the opening of the album, the dramatic yet symphonic Dark, could imagine Sasha writing the pieces for Robert Rodriguez’s El Mariachi trilogy for some mind-blowing action scenes.  Then there are the psychedelic touches on April as Sasha goes into a tribute to the city of Brazil and homage to Tropicalian scene during that time period while the gothic and sombering East, takes you into the 1950s smoky night clubs in New York as if Sasha was with Coltrane and some background vocals helping him out with this astonishing composition.

Los Pajaros (The Birds), has some wonderful Folky touches as you imagine the creatures flying to their nest and helping their young ones to sleep and feeding them by letting them know everything’s okay and then everything becomes another mourning featuring a dooming bell and almost a moving dance composition on the Renaissance turned Psych-Prog late ‘60s/’70s sound on Distance as the instruments come in for this beautiful montage to go into a slow ballad. All in all, Films is a breathtaking album that Yagull has unleashed into the sounds of the guitar and classical music combined into one.

Moonjune Records, have finally unleashed something strange yet beautiful at the same time. I’ve played this about five times already and I’m completely hooked into Sasha’s guitar work and I can’t wait to hear what he will have up his sleeves with the group and hopefully he’ll probably do a score for an independent film sometime in the future.
Posted by znathanson at 1:00 AM