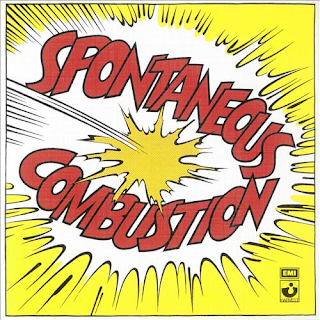 When you have a band that carries the sounds of Deep Purple and Pink Floyd rolled up into one, you know you might be worth checking out. One of the bands was a trio from Dorset, who could have been bigger than the two bands and taken their name from increase temperature, just proves how heavy and hard they were. Spontaneous Combustion consists of the Margrett brothers, Gray (guitar, VCS3) and Tristian (Bass), along with Tony Brock on drums. Their first two albums (Spontaneous Combustion and Triad) has finally been given the reissue treatment done by the good people at Esoteric Recordings and this one of the unsung hidden treasures of a band that were obscure and ahead of their time.

They started out as a singles band, but it wasn’t until Greg Lake of King Crimson and ELP fame heard about what they did and he produced their sole self-titled debut album released on the Harvest label in 1972. And while the cover done by Paul May has this nice wonderful tribute to Jack Kirby and Steve Ditko design from the Marvel Universe, the music itself packs a punch and the sound can show how much talent they have brought was almost a fast production.

Opener, Speed of Light, is a thumping and thunderous roaring introduction rocker with Gray and Tristian’s guitar and bass riffs with an attitude that almost feels like an on-the-road or motorcycle song that is out of this world and not to mention a shrieking VCS3 finale to get you ready for more of what’s left to come. The mellowing Listen to the Wind has bits of catchy and relaxation which is a perfect trick they pulled into this composition. At times it has this combination of Wishbone Ash, but then goes into this movement that is straight from the Benefit-era of Jethro Tull that is almost an awe experience.

Meanwhile, the haunting Leaving starts off as an acoustic melody, but then the tension level builds up into a climatic-climax sequence between acoustic, electric, and pumping drum work done by Brock while 200 Lives feels like a moving ballad into a swinging-rock out melody as Tristian comes up with some wonderful fast bass lines while Gray comes up with some bluesy guitar licks to help him out. The magic and darkness comes into the light of the band with Down with the Moon that at first it’s going to be spiritual, but then the uplifting tempo comes in full swing with vocal and guitar setting the tone and vibration.

At about 10 minutes and 35 seconds, is the epic track, Reminder. This composition is out of this world featuring various changes and twisted time changes and you would never know what kind of trick would have up their sleeves going from Fast, Hard, Country Rock, Slow, and in your face that will have your jaws dropped. While their first album didn’t do well, it is still a knockout and some of the people were just not ready for a Heavy Prog band to come in full swing. 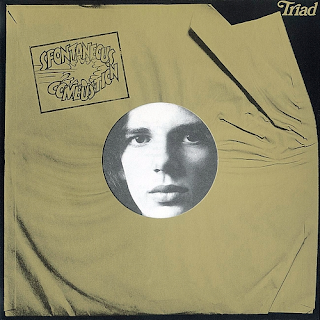 Their second album, Triad, sees the band learning from their ideas and their lessons from their previous debut and takes into a heavier approach. Songs like the rumbling touches of the solar system on Spaceship and Brainstorm, sees the band go into a thrilling bluesy yet atmospheric rocking adventure into the milky way while the piano ballad Child Life, is a touching composition on becoming a father and spending more time being a family instead of going on the road.

Then on Pan, it becomes this combination of Yes meets the Welsh Rockers Man as the guitar has this Peter Banks-like style riff on the guitar along with Love and Laughter with a ‘60s psych twist. Then, everything becomes a folky enjoyment with Rainy Day and not to mention the Bluesy sounds of staying home and watch the rain pouring down and laid-back. Then everything becomes a full-throttle finale with the 3-parts of Monolith. Along with their previous epic, this has mixtures and craziness combined featuring Heavy Prog, Jazz Rock with a combination of The Doors meets Locomotive, then back into the fast-driven roaring engine to close the album up with a bang!

The bonus tracks, features the A and B sides of the singles when they were a part of the Harvest label. And listening to pieces like the punchy Lonely Singer, the spacey-pop synth and organ touches on Gay Time Night, and their own touch of Aram Khachaturian’s Sabre Dance, is a swirling knockout guitar layered eruption with a constant enthusiasm and not to mention the slowed-down version with an ambient sound featuring some keyboards to go along with the track.

It’s a shame they called it a day and went different directions and the liner notes done by Classic Rock and Metal Hammer writer, Malcolm Dome shows a lot excellent information and this is a must have for any obscure prog fan to discover the lost bands who never saw the light at the end of the tunnel.
Posted by znathanson at 8:51 PM