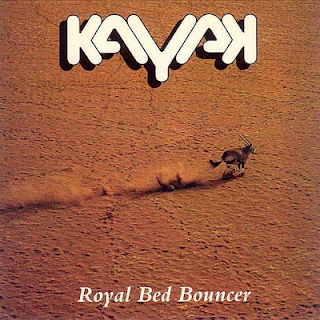 Now could Kayak have been bigger than Styx and Boston? Could they have paved the wave of the AOR (Album Orientated Rock) movement? Or could they have been the pioneers of Arena Rock? Who knows, but with the band’s music Kayak were very different from the way they played and were overlooked, but had a huge cult fan base in their hometown in the Netherlands. After releasing their first two albums, it was time to go into the outer limits and much Prog-Pop as well on their third album, Royal Bed Bouncer.

Originally released on the Harvest label and reissued by the good people at Esoteric Recordings, it’s still a power-driven-gentle Prog album that will take you into different places. According to the liner notes done by Wouter Bessels, the title came from King Henry VIII, who would have his bed checked every night if he had a pitfall. Ton Scherpenzeel’s keyboard playing is like a jet engine that is ready to go and is up for full speed to go 500 miles per hour that has this touch of Classical and Symphonic structures as Max Werner’s sings beautifully on the whimsical opening track that unfolds the sounds of Kayak’s music.

There is also a romantic side as well that sees the band paying homage to Electric Light Orchestra’s Out of the Blue-era. The uplifting Bury The World is Kayak’s chance to give it a moment to go into this swirling yet spacey ballad featuring Johan Slager’s impressive guitar work as he challenges Jeff Lynne and Brian May while Ton goes into this ambient/atmospheric solar system outer space music that is a mind-blowing adventure like you’ve never seen before.

The catchy sing-along melodic structures of (You’re So) Bizarre has this Broadway inspired sound with a walking driven line in the music featuring thumping bass, Rhodes, organ, and ballet-like dances on the drums to make it fun and exciting.  Then there’s If This Is Your Welcome in which Ton channels his Elton John chops on the piano to capture the essence of the early sound of the golden era of Glam Rock along with the soothing emotional touches of Life of Gold that feels like it was taken out of the sessions for Goodbye Yellow Brick Road and Queen II.

Then they go into light speed with a lot of exuberance on Chance for a Lifetime. It has thunderous Piano work, Sax, rumbling guitar riffs in the rhythm section, and going into Heavy and Orchestral/Renaissance rock, as the song deals with Noah’s Ark, but instead of animals, they are fans in the ship to sail towards a rock concert to get the best seat in the house to watch a full-explosive show from start to finish. Patricia Anglaia is a wonderful yet mellowing instrumental piece.

Featuring Patricia Paay with her gentle and soothing vocalization, Ton helps her out by going through various chord progressions to follow her melodic voice on the keyboard and the accordion by almost taking this piece into an operatic format that is completely spellbound. Meanwhile on Said No Word comes at you by giving you a big jump out of the listener’s chair with another fast-driven rock out voyage as Bert Veldkamp just nails it out with his Bass by paying tribute to Chris Squire as the closer, My Heart Never Changed takes it into a calm-like sound with a jazzy feel that closes the curtain on the album.

The band went through various line-ups and moved into the AOR sound in the 1980s, but Royal Bed Bouncer is one of the band’s finest work to come out. Let’s hope Esoteric Recordings reissues the other Kayak albums from The Last Encore into Merlin. But if you want to get into Kayak’s music, the first three albums are a must have for any Prog fan to sink their ears into listening and understand why they were ahead of their time.
Posted by znathanson at 11:03 PM