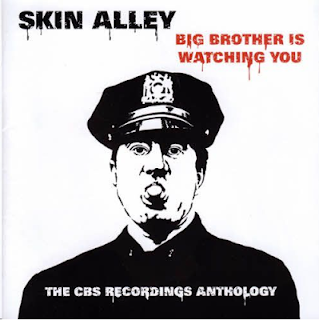 Ladbroke Grove, located in the west side of London and crossed between the Westway from Notting Hill and into Kensal Green, became a movement in that area during the late ‘60s and early ‘70s. And it was also an underground scenery as well for the up-and-coming psychedelic bands like; The Deviants, Here and Now, High Tide, Pink Fairies, Hawkwind, and Skin Alley. Yes, Skin Alley was one of the most overlooked bands to come out of Ladbroke with touches of Swing, Soul, Jazz, Avant-Garde, and Folk.

Formed in 1968, this British Rock combo were taking the listeners into different areas with their music and this 2-CD set, reissued by the good people at Esoteric Recordings, is a wonderful gem covering the band’s first two albums (Skin Alley and To Pagham & Beyond) and it also is researched very well with the liner notes done by Mark Powell, giving a clear history of Skin Alley’s work and how they came to be and why they were completely overlooked and ahead of their time.

And it also features some of the unreleased material of the soundtrack to the film Stop Veruschka, which has never been released, was about the infamous German model of the late ‘60s who would later have a five minute cameo in Michelangelo Antonioni’s 1966 classic, Blow-Up. To Skin Alley, as I’ve mentioned before, had the sounds of the five genres and it can really pack a punch when you listen to the albums from start to finish and you can imagine what it was like in the underground scene and receiving word-of-mouth about the band’s music.

The rumbling flute, percussion and organ-driven beats on Living in Sin which kicks off the anthology set, is a powerful force of nature that is out of this world and just hits you right in the gut with its Psych Jazz-Soul touches on the opening track.  And that is a perfect way to open the compilation off and understanding how a combo can really be powerful and give you an understanding that the Prog genre isn’t just a dirty word.

You have some wonderful pieces including the mellotron and organ spookiness homage to the Moody Blues on Tell Me, the dooming waltz meets droning vocalizations on Mother, Please Help Your Child, the wildly sax exercise with a Coltrane-sque touches on Marsha, and the folky thump comes back into the groove with Night Time. Then, To Pagham and Beyond which was released in the same year as their follow up to their self-titled debut album in 1970, has a relaxing and laid-back jazz rocking sound, but still carry the influences of their previous work.

There’s the soul-blues organ shuffle with some punchy vocalizations on Walking in the Park that resembles Booker and the MG’s along with the harmonica brass rocker turned spaced out adventure, Big Brother Is Watching You while the Swinging Avant-Jazz Rock comes at you like it’s the 1940s all over again with Easy to Lie. Then there’s the raga-rock inspirational 9-minute touches of Take Me To Your Leader’s Daughter that has a bit of the Orwell concept in there and not to mention the exercise passage works of flute, acoustic guitar, and percussion that makes it a mind-blowing enjoyment.

Now, the Stop Veruschka sessions are a real treat which cover the two-disc set on the anthology. It’s a lost and rare treat hearing these unheard compositions including the uplifting harpsichord brass punches on Russian Boogaloo while the Free Jazz musique concrete comes into a haywire effect on Cemetery Scene and First Drug Scene as if Lol Coxhill came in and did some sessions with his sax with the band including a wailing female vocal going off the wall.

But it’s Snow Music that is really interesting as they go into the classical routine of the 17th century that is quirky and fun as Sofa, Taxi, and Sand Themes that becomes this nightmarish ride into the dark and seeing where the road is going to take them and finding out what life really is. Big Brother Is Watching You: The CBS Recordings Anthology is a must have for anyone for wants to sink into the obscure gems of the Progressive Rock and the going into the realms of the Ladbroke Grove scene as well.

So if you love Hawkwind, Heron, High Tide, and Trees to name a few, then Skin Alley’s anthology set is the one you’ll enjoy and understand the meanings of hidden treasures and lost gems of the Prog/Psych underground scene.
Posted by znathanson at 1:00 AM