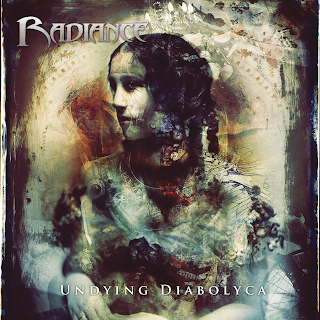 There’s something coming out of the world and voyages in the city of Italy. That group is called Radiance that has embarked the sounds of Fantasy, Opera, Power Metal, Story-telling, and the views of life, death, and rebirth. Their debut album, Undying Diabolyca, is almost a mini concept album about a feminine figure who is a time traveler as she is both from heaven and hell dealing with issues on life and death, witch and healer, and salvation. The band considers Federica Viola on guitar, Fabio Accardo on Bass and Synth, Elio Lao on Drums, and Karin Baldanza on lead vocals.

Combining with the sounds of Prog Metal that comes out with a heavy eruptive crunching sound that thunderous between the inspirations of Tool, King Crimson, Amberian Dawn, Hammerfall, and Nightwish rolled up into one, but there is some real mind-blowing machine-gun sounds from the guitar and drums as they revved up their riffing and pummeling stomping like a tidal wave that is ready for a full on battle. Haunting, Driven, and Explosive, Radiance are the real deal when it comes to bring two of the genres of metal both Power and Prog rolled up into one.

The gentle turned heavy opener, Towards Doom starts out with roaring guitar lines between rhythm and lead that Federica does as it segues into the thunderous and sinister rumble, Another Way. Here, Karin challenges both Heidi Parviainen and Sharon Den Adel on her vocalization as the band creates this militant yet metallic opera that would set the Metal Festivals up a storm and whip up into a huge frenzy. Behind the Light is a train-driven yet charging roar for Radiance to go full speed ahead and going into the rumbling lines that sends shivers down your spine as Federica nails it by paying tribute to Yngwie Malmsteen, Brian May, and Kirk Hammett.

Sounding like the Kill ‘Em All-era of Metallica and the Powerslave-era of Iron Maiden, Storm is a tour de force. It has nice touches of Thrash and bits of NWOBHM (New Wave of British Heavy Metal), at times the music is very dramatic yet with a lot of action as the group work as a team while Resonance sees the band go into a quiet and calm mode for the band to give a chance for the louder side a small break as they break into an acoustic and folky surroundings with a lot of ambient and soothing atmospherics.

The mind-blowing Whirl’s Criterion and La Poison a La Mode are transformed into whirling, thrill-seeking, and staggering marvelous compositions as the title track offers a lot of explosive counterweights to have your jaws dropped including a thumping bass line that Fabio brings as we head to the closer, Pulse of Awakening. Features both Synth and Bass going into this ‘80s futuristic atmosphere, it has this ambient/atmospheric surroundings that feels as if they had done the score to Ridley Scott’s Blade Runner.

If you love the Female Symphonic and Power Metal bands, then Radiance is one of the bands to check out and dig Undying Diabolyca. A heart-stopping album that is worth checking out.
Posted by znathanson at 3:36 PM