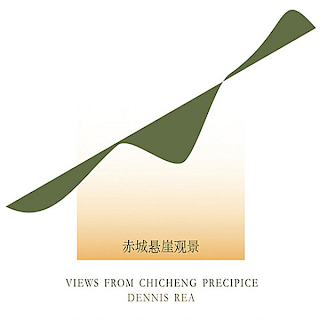 Taking inspiration from the traditional scenes of China, Vietnam, Korea, and Japan, virtuoso guitarist Dennis Rea, lived in different locations in the late ‘80s into the early ‘90s and discovered world music from the four places he went to in East Asia. The album, Views from Chicheng Precipice, is Dennis’ love letter to Asia and can really be a nice tribute to the city and taking the ideas of the views from the inspiration is really a tribute and homage to the four place he adore and loves in his heart and soul.

There are touches of the Musique Concrete, Avant-Rock and RIO sound in there with touches of Dennis guitar playing in the style of George Harrison’s Revolver-era, John McLaughlin, Frank Zappa, and Andy Latimer. He’s not trying to rip them off, but pay homage with a chance to lay loose and give a chance for some of instrumentalist including Stuart Dempster on Trombone and Elizabeth Falconer on Koto to name a few to give it a style that is astonishing and mind-blowing at the same time.

Since I’ve mentioned Musique Concrete, the 6-minute eerie and surreal twist of Aviariations on “A Hundred Birds Serenade the Phoenix” is a perfect example. It goes into this electronic, nightmarish tension between Caterina De Re’s improvisation on her voice as if she is locked up in an asylum coming up with some screeching and shrieking vocals as if she crying out for help while Dennis goes into this haywire effect on his guitar as the instruments go into some pounding and thundering evil movement that feels as if it was left off during the sessions for Egg’s The Polite Force and Pink Floyd’s Ummagumma and the same goes for the 15-minute piece, Tangabata.

The calming introduction on Three Views from Chicheng Precipice (after Bai Juyi) features Dennis doing this middle-eastern yet psychedelic guitar layered sound as cellist Ruth Davidson helps him out with the melody by creating the scenery and atmosphere that makes it a perfect opening while the dancing vibes keep the tempos flowing on Kan Hai De Re Zi (Days by the Sea). It has this Acid Folk early ‘70s vibe as Dennis goes into the soaring sky with his guitar and plays this wonderful solo that is breathtaking and at times gentle and not to mention Ruth’s homage to Darryl Way as well.

Bagua (Eight Trigrams), is an homage to the Taiko drumming of Japan as Greg Campbell, Will Dowd, and Paul Kikuchi go straight into town for this thunderous pump on their percussion instruments as Elizabeth and Dennis do this howling call between Guitar and Koto, and it’s a perfect match made in heaven. You can imagine the group performing this wonderful piece of music at a Kabuki theatre in Japan and for the dance they would do and would do these wonderful step dances during that time period.

Then, it becomes this aftermath movement as the scenery becomes a gentle calm after the storm through slow and fast tempo to really set the tone and close the curtain with a high experimental note. All in all, this is one of the most world music/avant-rock albums I’ve listened to and Dennis has really shown a lot of talent with his work with his solo and with Moraine. Views from a Chicheng Precipice, is a must listen to album for anyone who loves the two genres.
Posted by znathanson at 1:00 AM